The Dollar Run: How Long Will it Last?

Surprising all but the boldest of contrarian investors, the U.S. dollar index has materialized as one of the best performing assets of 2014. Its rapid rise to prominence seemingly bends the rules of market physics, increasing in demand while the supply base also increases, and rather exceptionally. Following an unprecedented expansion of the monetary base due to the Federal Reserve’s purchase of government bonds from the public sector, a process christened as “quantitative easing,” the resultant condition logically should have left the economy with higher growth but at the steep price of inflation. Instead, we have deflation via the strengthening of the dollar, and major commodities, including gold and oil, sharply losing valuation. What gives? And how long will this condition last?

In order to better understand our current situation, we must first acknowledge the Fed’s motivation from a purely agnostic point-of-view. Groundbreaking work by famed economist A.W. Phillips forwarded the concept of a negative correlation between the rate of unemployment and the rate of inflation…”That is, Phillips showed that years with low unemployment tend to have high inflation, and years with high unemployment tend to have low inflation (Mankiw, N. Gregory. “Principles of Economics”.Thomson South-western. 2007. pg 802.).

Naturally, when given the choice, politicians prefer higher inflation and higher growth via a stronger labor market over deflationary trends and weaker employment figures. Inflation is a “hidden tax,” a rising of prices that affect all people regardless of socio-economic status. Deflation and its correlated rate of unemployment tends to hit the middle-class the hardest, and thus, the heart of any politician’s constituency.

Thus, it was no surprise that Ben Bernanke and company had their mind set on pumping liquidity into the system. However, decades earlier, economists Milton Friedman and Edmund Phelps argued (quite boldly) that government policies aimed at artificially inducing higher employment at the cost of inflation would only be successful in the short-term. In the long run, employment rates would return to its natural state of equilibrium. Friedman and Phelps’ statement was made in 1968. A few years later in 1973 after an intense period of fiscal volatility, the pair were proven correct.

One of the consistently overlooked factors is the duplicitous nature of inflation, that is, the difference between current inflation rates and expected inflation rates. Over time, consumers anticipate higher commodity costs and adjust their lifestyle towards the future paradigm; thus, whatever fiscal tools are used to “shock” the economy into growth will only have a limited effect. 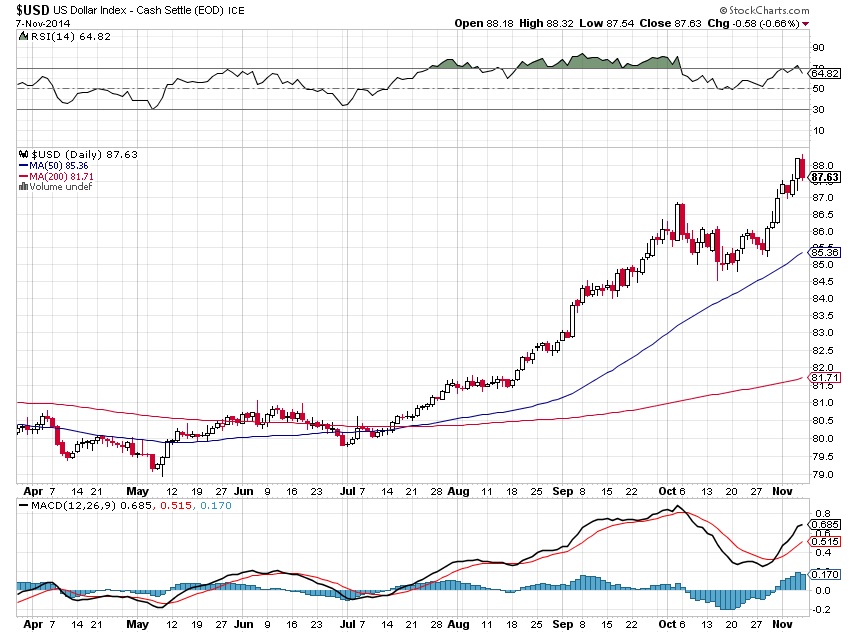 When we look at the U.S. dollar index, we can gauge that the current parabolic move is statistically aberrant. At the time of writing value of 87.63, this is slightly over 3-percent over last year’s closing high, an extremely large move for a currency index. Compare this to a 0.95-percent peak-against-peak move for the year 2013 against 2012 and we quickly come to the realization that the trading dynamics for the dollar has become “unhinged.”

The question is, are these rallies sustainable? If macro-economic conditions can only be affected “positively” on an ephemeral basis, there is no reason to believe that the dollar will continue its ride to the moon. After all, the current index valuation is a reflection of two factors: the Fed’s engineering of monetary policy and broad weakness in the international markets. Right now, the world’s preeminent central bank is in an enviable position with supposedly higher employment and lower commoditized costs. However, this was a result of unprecedented manipulation of fiscal levers creating unusual correlations in the financial markets. As has been demonstrated decades ago, such joy rides have a very limited and dangerous lifespan.