So much for the much ballyhooed stability of the equity markets! The Dow Jones Industrial Average dropped more than 394 points on Friday, losing 2% of value against the prior session. It was an across the board drop, with the S&P 500 and the Nasdaq Composite Index seeing similar losses. This breadth of volatility has not been seen since the “Brexit” panic, leading fund managers to take immediate action.

The biggest contributor to the malaise is U.S. Federal Reserve Chair Janet Yellen. In a meeting among key central bankers a few weeks ago, Yellen had expressed strong sentiment towards the economy. A nominally improving labor market combined with growth in securities suggested that the country was robust enough to handle a much-needed interest rate hike. With 10-year Treasury rates falling below 2%, this was not exactly a reassuring recovery.

Unfortunately, the pronouncements of economic health were obviously premature. Several industry bellwethers were awash in red ink, with only a few random names scoring up in the black. Fears that higher interest rates would lead to a collapse in overpriced securities became a self-fulfilling prophesy. It also underscored the fact that a true recovery is still a long ways off. 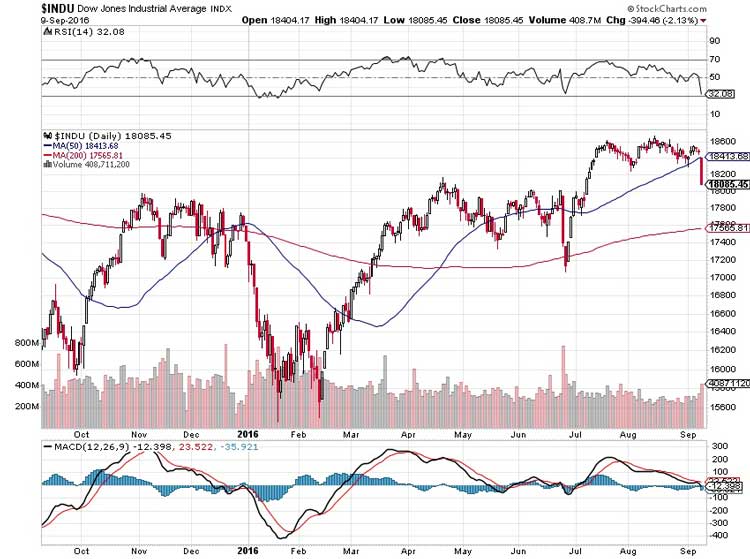 The evidence is written in the technical charts of the Dow Jones. We can see that strong support is established in the 17,800 point level. It was roughly the average area where valuations recovered to between the beginning of November and the end of December of last year. It was also the average “settling” range this year between April and July.

But something unusual occurred in the first week of July. Suddenly, the Dow and the broader equity markets lifted off from this established support range. Why? There really was no compelling new data that justified the increase in risk-on behavior. If anything, the Brexit was still a fresh memory, and should have caused the markets to correct.

This latest fallout is a confirmation that the aforementioned rally was nothing more than a bull trap. Hanging in a technical no-man’s-land, the Dow will surely correct to 17,800 points. From there, it’s a bit of a guessing game. I don’t really see the economy being stable enough to support a strong rate hike; thus, speculation towards rates is, in my opinion, a needless distraction.

But traders are a funny bunch. Upside or downside panic can easily strike again. The best idea would be to exercise extreme vigilance. Now is certainly not the time to bet the farm on any one position. Let the craziness filter out, assess the situation, and move forward carefully.