So much for the stability argument. On Friday, December 18, the Dow Jones Industrial Average slid more than -2%, or 367 points, against the prior session. The culprits were many, with global speculation towards macroeconomic fundamentals in light of the U.S. Federal Reserve‘s decision to raise key interest rates perhaps being the most popular. Leading up to Fed chair Janet Yellen’s call to shutter the monetary spigot of indefinite quantitative easing, many financial experts had postulated that the economy — domestically, at least — was robust enough to support a rate hike.

Unfortunately for the perma-bulls, that position appears no longer tenable — at least if the oil markets have say in matters. The international benchmark Brent Crude Oil hardly made an appearance last week, disappointing contrarians with only one positive session registered — and a relatively minute one at that. The index is currently trading 60 cents north of the $36 dollar mark, while the light crude index, West Texas Intermediate, is not too far off at $35.83. The supply glut in global oil inventories was just too much to bear, and seeing how production will not abate from the Organization of the Petroleum Exporting Countries, there was little point in Wall Street fund managers going long.

The derivative markets also had a significant hand in the volatility. With options contracts expiring on Friday, several traders were forced to come to terms with their various positions. Additionally, the volatility was several times higher than normal because of a phenomenon known as quadruple witching — an unfortunate coincidence of options, and options on futures contracts, towards stocks and asset indices.

Some will liken the steep selloff to be an isolated incident. Fundamentals, they may argue, don’t change over the course of a single day. However, it just might be that Wall Street was caught with its pants down, and was eventually forced to recognize its own BS. 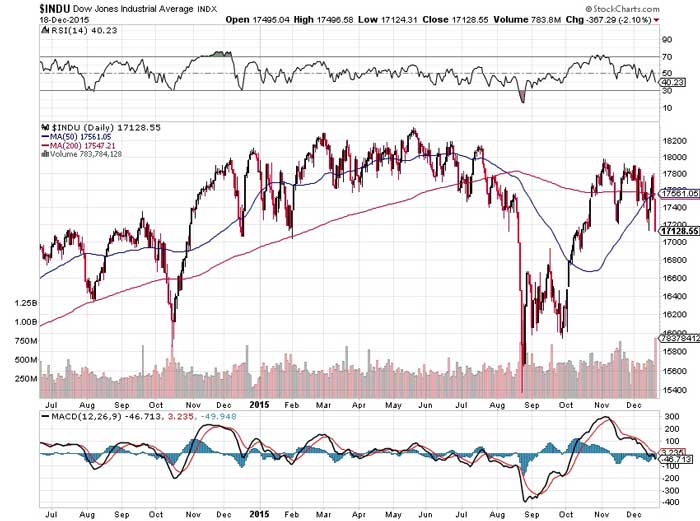 The simple fact is that last Friday’s selloff in the Dow Jones is exceptionally significant. One would have to go back to September 1 of this year to see a single-day loss of valuation that was steeper. And there were only two other sessions this year that were worse — both occurred during the lows of the broad market correction in August, with losses between them averaging -3.35%. Put another way, out of the 243 sessions that are recorded so far in 2015, Friday’s selloff ranks as number four. That’s information that the pubic investor should be made well aware.

As it stands, the Dow is in poor shape. Since the initial recovery from the August correction that peaked in the beginning of November, the Dow has charted a negatively-slanted pattern of lower highs and lower lows. In some contexts, this may be considered a bullish flag pattern, but that would more likely apply when the general sentiment preceding the flag pattern is bearish.

Instead, what we have here is an index that can’t seem to build momentum, almost as if the wind has been knocked out of it. In a way, it has. The Fed is determined to reduce money velocity and by so doing, it’s reducing the potential reward of staying long in the markets.