Dow Got You Down? Try Africa Instead

Among the contrarian investing community famous — or is that notorious? — for their against-the-grain approach to financial trading, few sectors outside of precious metals garner their attention like the emerging markets. The investment strategy is pure contrarianism: take a currently underdeveloped region at a deeply discounted price and watch it appreciate in value as mainstream investors recognize the potential.

This strategy has richly rewarded those that got into China, India, or the lucrative Latin American markets before the herd. But now that most of the easy gains have been made in these regions, investors are hungry for more. Naturally, this puts the final piece of the puzzle into sharp focus: Africa.

The allure is obvious — no one really wants to invest in Africa. This is evidence empirically by the fact that as of this writing, there are only four Africa-centric exchange-traded funds (ETFs) offered in the New York Stock Exchange. Only one of them — Market Vectors Africa (NYSEARCA:AFK) — tracks the continent as a whole, while the others are focused on a single country. Thus, a very elemental argument could be made that the region is still in its infancy from a Wall Street point-of-view.

That is both the good and the bad of the Africa story. On one hand, investors are getting a very good deal compared to valuations seen from a few years back. On the other hand, Africa is such a developing region that it’s technically not an emerging market at all — it’s a frontier market, and that has unique risks.

The benchmark for gauging stability in Africa is the Ibrahim Index of African Governance, named after its billionaire founder Mo Ibrahim. According to the index, the regional leader is Mauritius, which scored particularly high on the categories “Safety and Rules of Law” and “Human Development.” On the dubious end of the spectrum is Somalia, a country rife with violence, terrorism, and widespread government corruption. While the efforts of Africa’s leaders are certainly much appreciated, the overall lack of regional uniformity in basic human rights and economic infrastructures is extremely troubling. 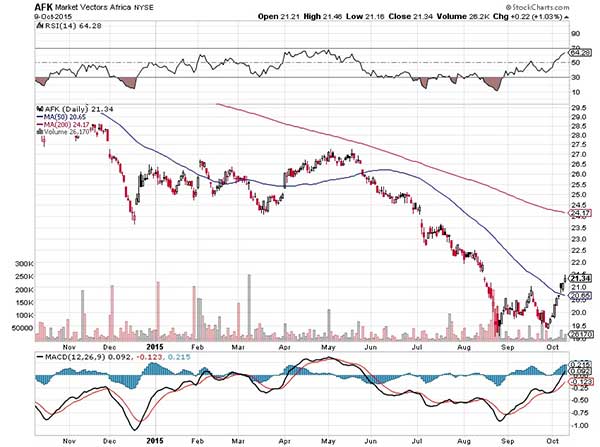 This pessimism has been reflected in the technical charts for AFK. On a year-to-date basis, the AFK ETF is down more than 18%. Year-over-year, the losses are even uglier at 31%. Moreover, in the past four years, the death cross — a condition where the 50 day moving average crossed underneath the 200 DMA — has flashed three times, confirming the inability of the bulls to attract a fresh capital influx.

Nevertheless, the extreme bearishness in AFK has to die out soon enough. The major stock markets of the world, while posting positive numbers last week, still haven’t done much to justify excess optimism. And AFK appears to be forming a rising level of support after bottoming in late August — could a rebound rally be on the way?

It’s extremely speculative, but the lack of growth in established market sectors does suggest that investors will be looking for returns in other places. Africa just might fit the bill.