The past week’s market behavior in the venerable Dow Jones Industrial Average is significant for a number of reasons, but primarily, the inability for the index to continue pushing for new heights indicates a misalignment between the political promises of a macro-economic recovery and the underlining reality of the fundamentals. As a confirming signal, methodologies derived from Elliot Wave Principles forecast further significant trading behaviors in both the Dow Jones and the gold bullion market.

Since early July of this year, the Dow’s price action has zig-zagged vertically, with each downtrend leading to a higher nominal threshold, but at the expense of yet another downtrend. This has created what is known amongst practitioners of the Elliot Wave subsection of technical analysis as a “broadening wedge” pattern. Also known as a “megaphone pattern” due to its triangular aesthetic, the appearance of this relatively rare formation indicates a higher than normal probability of a future decline in asset valuation. A target price range can be estimated by plotting a line through each “spike-bottom,” or the lowest point in the price action prior to recovery. Performing this exercise reveals a possibility of the Dow dropping to 15,000 to 15,500 points. 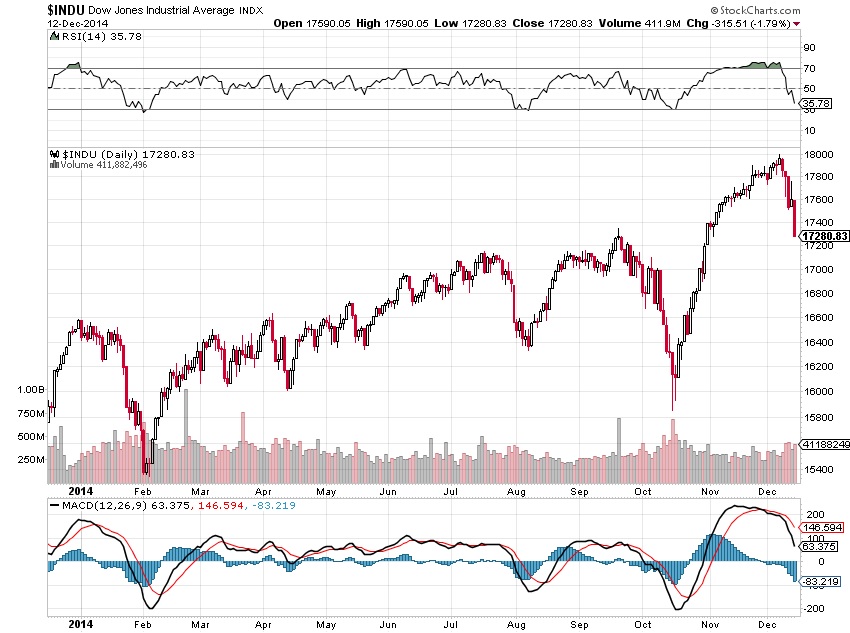 On the other end of the spectrum is gold, which has suffered a bear market cycle that was first initiated by the massive commodities sell-off in the spring of 2013 (which coincided with the Boston marathon bombing). However, the sentiment for precious metals may have finally turned around, a hypothesis that is logically tenable given recent geopolitical conflicts and gold’s status as a traditional hedge against uncertainty. 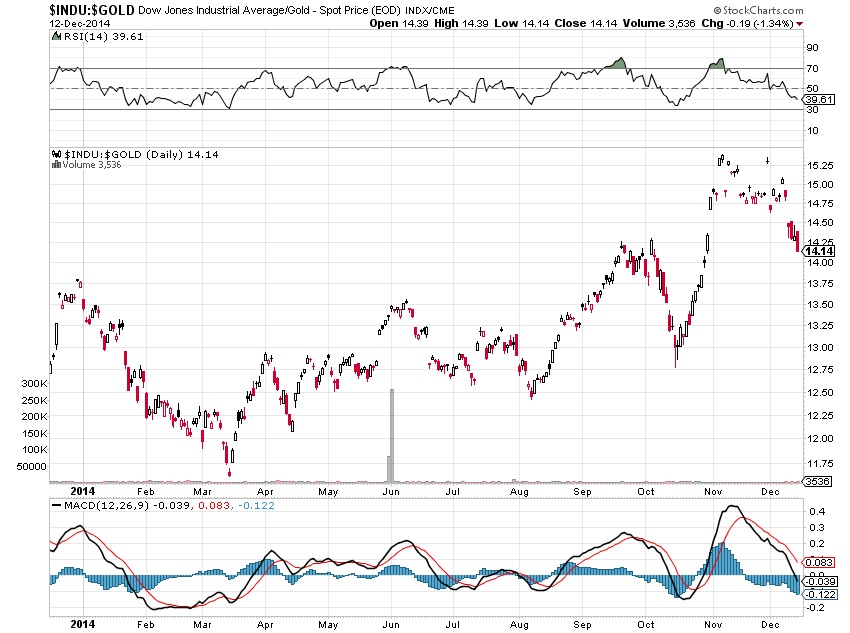 As a ratio, gold is severely undervalued relative to the Dow Jones, with one “share” of the index able to acquire 14 ounces of gold at time of writing (December 13, 2014). This is a substantial divergence from the Dow: Gold ratio months prior to the April 2013 sell-off, which was in a range between 7.5 to 8, or an implied loss of value of 43-percent. In and of itself, a market ratio is simply a mathematical expression of two sets of numbers, but within the current fundamental context, it appears that a correction in the ratio is likely.

If events culminate to its logical conclusion, it would imply higher gold prices at the expense of equity valuations. At first, gold could reach $1,400 per ounce over the next 60 to 90 days, and so long as the fundamentals remain relatively undisturbed, $1,700 by the end of 2015 is a reasonable target.

While gold remains a topic of heavy criticism from the mainstream media, the case for a bullish recovery is rather simple. The Dow Jones is an index that was originally created to act as an economic gauge. Since the real economy has failed to recover (as evidenced by a flat trajectory in personal income), this condition will surely weigh on the equities sector. As a result, the Federal Reserve will be incentivized to modulate its monetary policy (or announce as such), inducing inflation to further support a drifting labor market. This naturally would lead to higher gold prices as a reflection of both safe-haven demand and the nominal pressures of a weaker dollar.

Unless policy makers have substantively addressed the root causes of the so-called Great Recession, it would be foolish to ignore gold’s role as a safety measure. Given the recent volatility in the Dow, this warning is more pertinent than ever.