Did The Dow Jones Get Struck by the Friday the 13th Curse?

There’s no way to sugar coat it — the blue-chip markets have had a rough week. Based on other factors, it may get rougher still. Last Friday — coincidentally, the only Friday the 13th of this year — the Dow Jones Industrial Average lost 185 points to close down at 17,535 points. After starting the week on a positive note, the Dow ended up shedding more than 1%. Now, the index is barely above water for the year, and it will take a small miracle to get investors back on board.

That, however, doesn’t seem too likely. The benchmark S&P 500 also took a modest-sized hit, dropping nearly 1% on Friday the 13th, and going flat for the week. Year-to-date, the S&P is only 0.13% above parity. That’s still markedly better than the Nasdaq Composite Index, which is in the red to the tune of nearly 6% YTD. A year that many had looked forward to following a soft 2015 appears in hindsight to be cursed.

The primary issue is the fundamentals, and this is no better exemplified through big-box retailers Wal-Mart Stores, Inc. (NYSE:WMT) and Target Corp. (NYSE:TGT). In an interesting series of coincidences, the retailers and the indices hit their highs for the year within two days of each other. The S&P and the Dow both hit their peak on April 20, whereas the Nasdaq reached its summit on April 18. WMT did the same on that day, while TGT scored an all-time record high the day after. 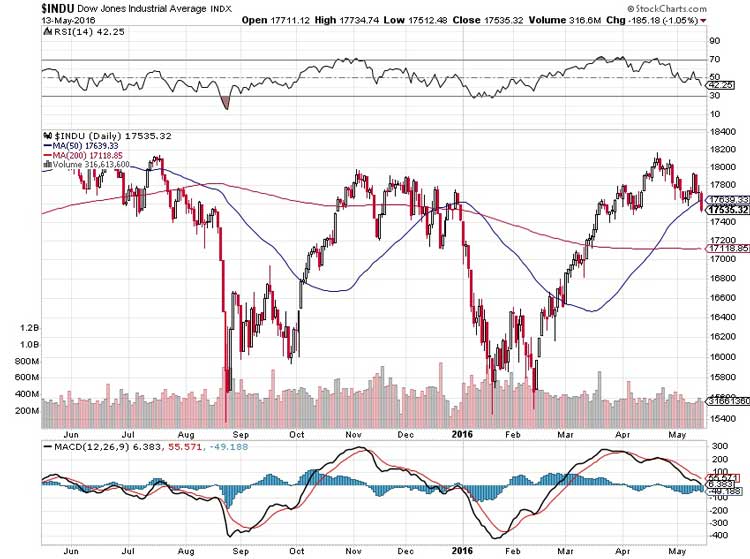 I’m not suggesting that these were coordinated events, although that would certainly make for a good story. Rather, the matter at hand is much more rudimentary. Regardless of how much the U.S. Federal Reserve may juice up the monetary system to buoy the markets, the individual companies that make up the major indices must have customers to buy their products. There’s only so much currency tailwinds and cost cutting measures that can be implemented.

I believe that’s what is occurring right now. Big-box retailers like Wal-Mart and Target simply don’t have the consumer sentiment level they once previously enjoyed. Families across America are tightening their wallets, doing more of their shopping at places like Dollar General (NYSE:DG). There’s a reason why TGT stock is only up 2% YTD, whereas DG shares are sitting pretty at double-digits.

Target in particular made a doozy of a business decision by affirming — and then later reaffirming — its stance on transgender identity. Rather than appease the demands of millions of American families, Target instead chose to defer to a very small element within society. Their stock has not looked the same since their politically-tinged statement.

And that points to a larger discussion. Rather than engage in sound fiscal and economic policies, policymakers have instead gone the exotic and irresponsible route. Unfortunately, that has brought about the curse of the double-edged sword. Policy can indeed buy an economy time. But unless that policy is backed by something substantive, there’s a great risk that all effort will be for naught.