The Dow Jones Is Surging But How Long Can It Last?

Against some pretty incredible odds, the long-standing benchmark Dow Jones Industrial Average last week gained 277 points over the prior week’s close. That puts the Dow Jones up 643 points for the year, and caps off a fairly solid run that began in mid-February. With a heavily contested presidential election year in full swing, there can be no doubt that the financial markets have recovered just in time for the equity bulls. But are the markets for real, or is this yet another tease?

Approaching all-time record levels is usually not a bad thing. But the latest advances by the major indices don’t point to much confidence. As one example, the technical indicators are rather soft after such a strong rally. Primarily, the individual bullish days over the past three weeks are not as strong as they were in mid-February. Trading volume has also been trending downwards, which suggests a lack of commitment on the part of Wall Street fund managers.

In addition, we should look at the Moving Average Convergence-Divergence, or MAC-D indicator. This technical gauge produces a composite picture of near-term and longer-term strength. At present, the Dow Jones’ MAC-D indicator is flat-lining — this isn’t a guaranteed harbinger, but it certainly gives pause for thought. Lending some confirmation of bearishness is the Relative Strength Indicator (RSI), which shows the Dow Jones at a somewhat overbought (over-heated) condition. 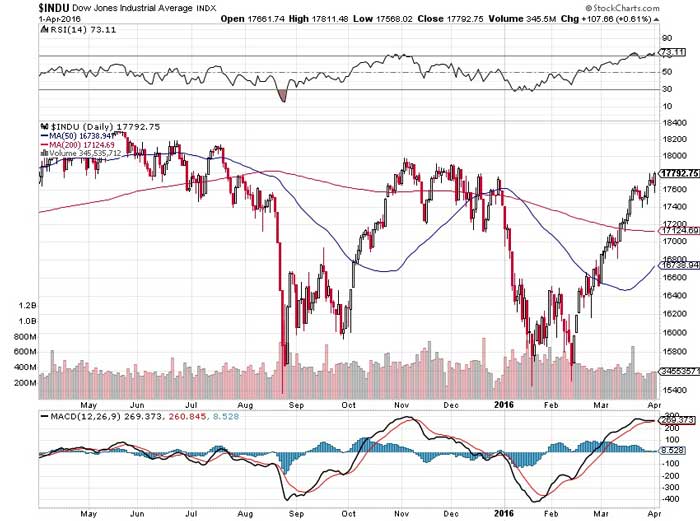 Fundamentally, the markets have been supported by a nominally strong jobs trend. Yes, they are dominated by low-wage opportunities, but from Wall Street’s perspective, a job is a job. Most importantly, the Federal Reserve has shifted its tone in terms of its monetary policy. Rather than espouse the much-promised hawkish vision, the Fed has instead agreed that the economy requires a more “hands on” approach.

That had a lot of traders rejoicing, but the optimism may be short-lived. The crude oil markets have taken a big loss last Friday, and that really means one thing — global deflation. While the U.S. markets are enjoying a return to form, international benchmarks have absorbed significant body blows. Europe and Asia are nowhere near where they need to be, neither economically speaking nor from a fiscal health perspective.

With that being said, it certainly appears as though the U.S. indices will benefit from a logically spurious argument — we are the best house in the worst neighborhood. That may be a noteworthy point if we were talking about a recent crime wave. However, if the entire community is in the process of being burnt out due to a wildfire, having a nice house will only make the pain of losing it that much more intense.