The Dow Rally Just Failed — More Pain Is On The Way

The recent rally in the Dow Jones Industrial Average has failed — and that sets the tone for even greater pain in the months ahead. Despite the latest data from the U.S. Department of Labor suggesting that the labor market has firmed, with wages growing and unemployment rates at eight-year lows, the financial markets have yet to filter the news in a positive manner. That is deeply problematic. As the old saying goes, “money talks and ‘something else’ walks.”

What’s taking a hike is clearly the investment community at large. Last Friday, the Dow Jones experienced yet another triple-digit loss, this time shedding 211 points to close down a hair under 16,205. The sad part is that the venerable index took the least flak among the major equity indices — on the same day, the S&P 500 index lost nearly -2%, while the technology-centric Nasdaq Composite absorbed a rather frightening -3.25% hit. 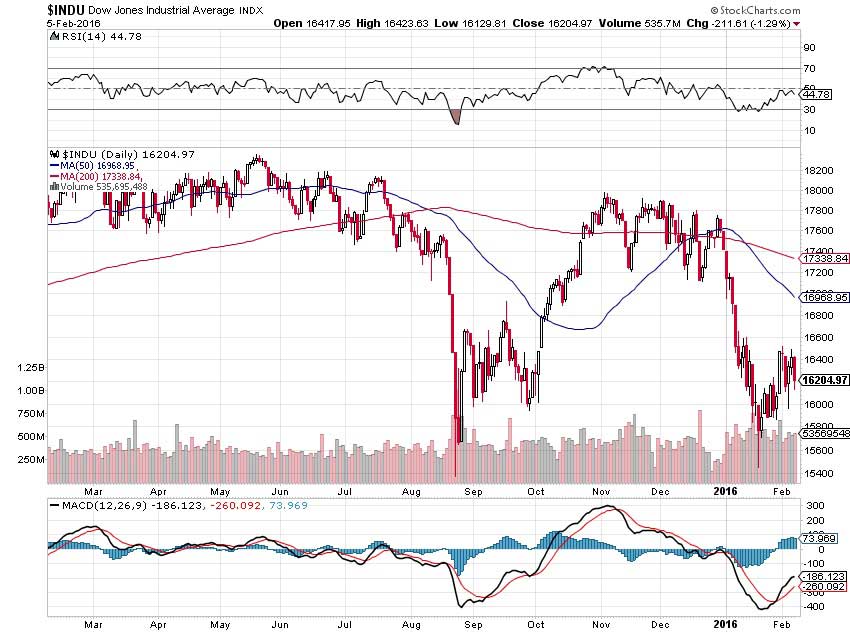 What in the name of Hades is going on?

On a very broad scale, the global economic engine is on its last leg. Lacking desperate resources, it’s only a matter of time before the engine implodes. The decline in gross domestic product across the developed world suggests that companies are running out of products and services to sell, not because the need isn’t there, but because consumers have become largely incapacitated.

The technical charts provide ample evidence of this bearish forecast. Back in late-August of 2015, the financial markets experienced a similar erosion in price valuation to what we are witnessing today. The key difference is in the magnitude of the ensuing recovery.

Between August 24 and August 27, the Dow Jones jumped 5% to close at 16,654 points after hitting a low of 15,370 points. In January 20 of this year, the Dow slipped to an intra-day low of 15,450 points; however, after more than two weeks have subsided, the index has yet to reach beyond the 16,600 point barrier. In fact, even the intra-day high over the past two weeks has failed to touch the aforementioned level.

If there was a time to wave a giant red flag, it would be now. The Dow Jones has had ample opportunity to duplicate the 5% swing after suffering a massive collapse in valuation, and it hasn’t done so. We are now left with a situation where twice the markets have choked, and each time, a substantive recovery has failed to pan out.

Unfortunately, this present situation looks far worse than before. In the last occurrence, the sudden drop in the markets was a shock to the system. Now, we are staring at market conditions that are unfavorable throughout the international community. With so many sectors flashing red, the probability is very high that the volatility is only just beginning.