The news that few, if any, mainstream business media outlets want to run is the dying momentum within the Nasdaq Composite index, essentially the Wild West of the financial markets. Unlike the venerable and appropriately stodgy Dow Jones Industrial Average, or the benchmark S&P 500, the Nasdaq has always catered to the mavericks of the American business landscape with its electronic trading infrastructure and relatively low standards and barriers to entry.

How Low Are the Standards?

The joke is that it has none: any company with an underwriter and an open wallet can get a listing in short order. That’s why the index is littered with technology companies that are effectively running on the hopes and dreams of intangible and proprietary formulations reaching their true (and hopefully marketable) potential. Along with the computer geeks come the medical geeks, whose speculation may be rooted in more tangible mechanisms but ultimately represent similar risk levels. Of course, the reality is that the standards are fairly strict and the Securities and Exchange Commission have a wary eye on all public investments, regardless of their trading origins. But the real question is, how long can the alleged economic recovery that is trumpeted by the current administration survive a dearth in cash influx towards small and mid-tier businesses, a sector that routinely provides the bulk of innovative products and ideas?

The thesis that the Nasdaq is suffocating is a result of trend analysis towards buying and selling pressure within the index since the global financial collapse of 2008. As the chart below indicates, both bullish and bearish trading activity were highly prominent in the early stages of equity market recovery post-2008.

Heading into 2013 and for much of 2014, the momentum for both parties waned significantly. What is more disconcerting is that buying pressure has slowly subsided as the Nasdaq enters into multi-year highs while selling pressure has seen an uptick, especially in the closing months of 2014. The price action (monthly basis) of the index itself somewhat tapered off, which lends credence to the idea that market participants are not confident about future projections and are unwilling to commit vast amounts of capital towards a one-sided bet. 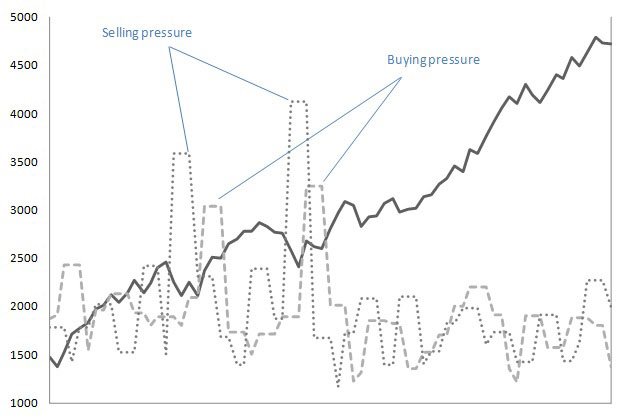 If that is the case, the markets might be headed for a near-term correction. Without the volume of activity needed to keep a good run going, mass human psychology tends to panic, resorting to the primal urge to protect one’s assets from severe loss. If something of fundamental substance does not materialize later in the year to offer investors a measure of confidence, the correction may become protracted.

The momentum decline has significant repercussions for the nation’s economic agenda. As both government and private labor market data will attest to, job growth is largely attributed to small and medium-sized businesses. Large businesses, if anything, are down-sizing. But if smaller companies are not receiving the necessary investment capital they need to survive, this poses a substantial risk towards not only employment trends, but national growth as well.

As we enter a new era of a Bernanke-less Federal Reserve, his thesis of monetary expansionism may once again be called into action should the minion index of Wall Street fail to meet expectations.