In a year that has been marked with geopolitical turmoil, rampant terrorism, and volatility in the financial markets, many on Wall Street and Main Street are looking for honest barometers of economic and societal health. Despite lengthy overtures by the current presidential administration, instincts implore that the promises of a so-called recovery in the economy is nothing but smoke and mirrors. A critical look at Dollar Tree, Inc. (NASD:DLTR) tells us all that we need to know.

As one of the leading dollar discount retailers in the U.S., Dollar Tree has a finger on the pulse of consumer sentiment — particularly that of the lower class, and increasingly, the middle class. If the economy was truly moving in full swing, we would expect a majority of its sales to come from the lowest income bracket. However, a cursory look at Dollar Tree’s balance sheet reveals that this may not be the case at all.

In the last reporting quarter (Q3 FY2015), DLTR reported net receivables of $85.5 million, a dramatic 332% increase from the prior Q2. Net receivables, while assets, have a time component associated with them due to the fact that they represent earned monies that is owed to the company. We can therefore surmise an increase in unusual activity, such as customers paying with credit as opposed to cash. Credit card purchases are mostly a middle class burden — they are deemed by financial institutions to be “credit-worthy” and are thus inundated with multiple credit card offers.

It’s also peculiar that despite the cyclical shifts of the economy, Dollar Tree largely operates a secular business. That is, it doesn’t matter how things are like: everyone needs to eat and sleep, and everything in between. Whether rich or poor, the discount retailer fills universal demand at rock-bottom prices. Logically, then, a sound economy would lift all boats, especially businesses offering the most competitive deals. 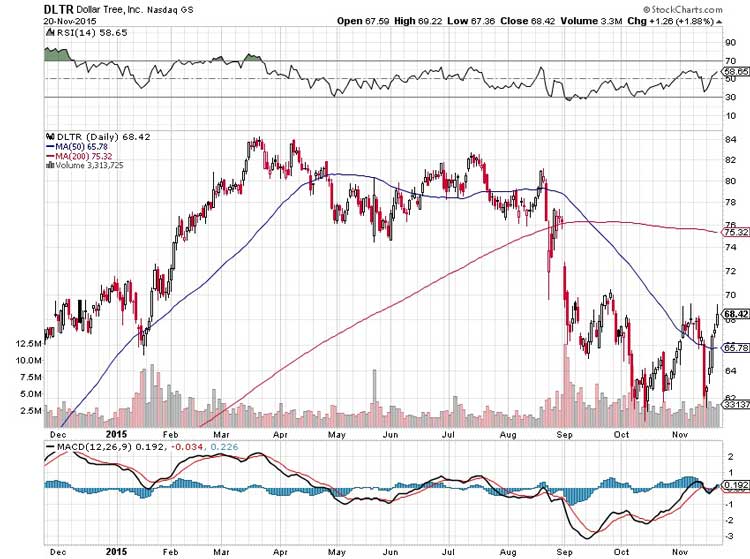 That again is not what the facts show. Despite a strong growth trend in top-line sales — currently trailing revenue exceeds FY2011’s results by over 65% — we do not see the same magnitude of bullishness in net income, or profitability. Trailing net income is down nearly 22% against FY2011 thanks to substantially reduced margins. Earnings per share trend has been decidedly pessimistic this year — an uncomfortable position for DLTR shareholders, considering the looming Q4 FY2015 earnings report to be released this shortly.

Nothing operates in a vacuum on Wall Street, and Dollar Tree is a perfect example. Because of its underperformance in profitability metrics, the stock’s P/E ratio is extremely high at 45 times trailing earnings. Against discount retailers, DLTR’s P/E ratio is higher than 80% of its competitors. Even though the markets discounted DLTR by nearly 12% since the start of August, there’s still much more room for “improvement” — the poor earnings potential of the company may not justify bankruptcy, but it certainly doesn’t value its aggregate equity at $68 a pop, either.

A similar assessment could be made about the broad financial markets — they certainly have value, but at current levels? We’d have to see actual earnings trends to rationalize such optimism.