The recent announcement made by U.S. Federal Reserve chair Janet Yellen that certain metrics within the American economy do not yet justify an interest rate hike may be lauded by blue chip equity bulls, but it’s hardly the news that anyone with a bare minimum of financial education would want to hear. In theory, lower rates are inflationary and thus supportive of higher valuations in capital markets. The problem, though, is that other nations — in particular, the emerging markets — are playing the same game.

The disaster that has been the Chinese stock markets — the de facto leader of the developing nations — was well-documented, a byproduct of extreme speculation in the absence of real demand. But the causation of the subsequent collapse was not simply due to rampant optimism, but the manner in which government bodies attempt to lift the economy.

Rather than engaging in substantive activities such as lowering individual and corporate tax rates and incentivizing foreign capital investments, the emerging markets have largely focused on financial engineering. India’s central bank was just the latest government body to take the bait.

According to RTT News, “India trimmed its key interest rates by a bigger-than-expected 50 basis points to a four-year low on Tuesday as economic growth in the current fiscal was forecast to be weaker than previously projected, mainly due to weak investment. The Reserve Bank of India, governed by Raghuram Rajan, cut its repo rate to 6.75 percent from 7.25 percent and the reverse repo rate to 5.75 percent from 6.25 percent with immediate effect.” 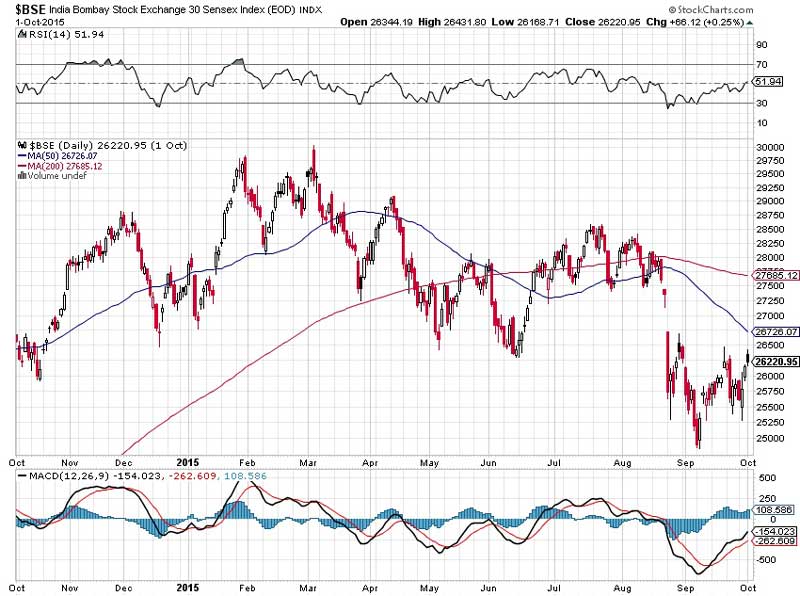 The manipulated rates from a technical perspective has yielded marginal success — a 1.7% increase in the Bombay Stock Exchange since September 29, the day of the rate drop. However, the magnitude is a drop in the bucket compared to what has been lost in the broad market correction in late August. Further, the modest valuation bump has failed to beat the upper resistance channel of a negatively slanted consolidation pattern since the August correction.

Fundamentally, this is an extremely problematic circumstance. India, like many other emerging market nations, have witnessed a dearth of investment capital. Interest rate modulation have only brought about limited growth, even at what should be considered attractive valuations given the recent broad correction. Logically, we can deduce that most investors see very little capital growth potential.

However, they also fail to see passive revenue potential. The reduction of Indian interest rates means investors will chase yields elsewhere. Many forget that the country has a sovereign debt rating of BBB by Standard & Poor’s — considered one step above junk status. Therefore, stability is not necessarily one of India’s core strength.

But since capital growth has been confirmed to be weak, where else will India and the rest of the emerging market complex find their demand? It’s a damned if you do, damned if you don’t situation that plagues the entire global economy.