Equities Breakout: Too Fast, Too Soon?

With the benchmark S&P 500 index finishing off the prior week with a record closing mark one-hundredth of a point shy of 2,097, the general sentiment on Wall Street is one of anticipation as investment analysts look forward to an extension of the current bull market cycle. The focus of Main Street, which has been inundated with pessimistic headlines concerning oil market stability, the Greek debt crisis, and the ongoing turmoil in Eastern Ukraine, has shifted positively, with many gaining confidence that the domestic economy is relatively immune from the chaos abroad. “As ‘stocks have found a footing, people aren’t as afraid of the potential negative’ stemming from recent instability in oil prices and Greece, said Wayne Kaufman, chief market analyst at Phoenix Financial Services in New York” (Lau, Ashley. “At record high, U.S. stocks look to extend breakout“. Reuters. February 13, 2015. Web.).

Traditional measures to gauge volatility, such as the CBOE Market Volatility Index, or better known as the VIX, have indicated a deceleration in selling pressure. Colloquially regarded as the “fear index,” the VIX briefly fell below the 15 level last Friday after oscillating over its historical mean of 20 during half of this year’s trading sessions (Lau. Reuters). The significance of this alleged lack of psychological uncertainty is that it is tied in with a hard-charging equity index, a confirmation sign that many technical analysts regard as a positive for even higher swings in valuation.

Arguably, the fundamental indicators from the companies that comprise the broad-based indices are even more bullish than the technicals. According to data from Thomson Reuters, of the 391 corporations listed on the S&P 500, approximately 71-percent have exceeded earnings expectations, which is a higher allocation compared to the historical average. Barring a negative earnings surprise from the remaining corporations such as Wal-Mart, which releases its fourth quarter results later this week, the anticipation is that the Street will continue to pile on the valuation game. 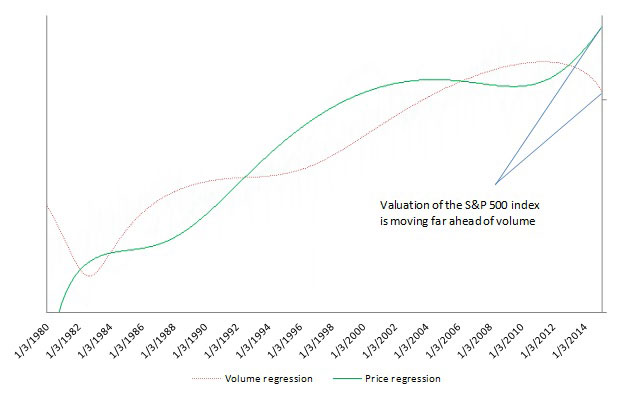 However, not every indicator is suggestive of positive momentum. According to polynomial regression analysis of the S&P index’s price action and volume, the record-breaking surge has failed to yield an equally congruent rise in trading capacity. Against a long-term framework going back to 1980, volume velocity has actually declined. This is particularly troubling since the price action in contrast has catapulted to a remarkable degree, which of course indicates that bullish emotions (demand) is outpacing supply. Unlike consumer markets, investment markets cannot simply generate additional supply to soak up the increased demand base. The reality is that someone, somewhere, has to be willing and able to acquire positions at a given price. If this circumstance was unclear in prior years at lower valuations, it’s highly improbable that the situation would improve at record-breaking price points. After all, the labor market is far from healed from its last disaster in 2008.

Which then brings us to a fundamental counterargument. While it is true that earnings results have in large part exceeded Wall Street’s estimations, it also worth bearing that unusual circumstances entered into the calculus of our economy, specifically lower gasoline prices. Such statistical outliers cannot be depended upon with regularity, with the real test of corporate America’s strength occurring when stagnant wages and a recovered oil market collide once again.