Will the Fed Rate Hike Slow the Trump Rally?

Undoubtedly, Donald Trump has the Midas touch — everything he approaches literally turns into resounding, golden success. Seemingly, his election victory — as awe-striking as it is — is just the beginning. The financial markets have responded with overwhelming vigor, making a mockery of standard economic logic.

Let’s consider some hard facts. The benchmark S&P 500 is up 5.5% since November 8. The Nasdaq Composite Index is up 4.7%, while the big daddy of them all — the oft-cited Dow Jones Industrial Average is up a breathtaking 8.2%. What mainstream analysts feared would be a severe deflation due to Trump’s no-holds-barred rhetoric has instead been just the opposite.

Indeed, the Dow Jones has rarely taken a breath since “The Donald” became President-elect. But now, there are perhaps the early indicators of kinks in the armor. What Wall Street is anticipating is the venerable index to breach the 20,000 point barrier. It got pretty darn close on December 14, when the high of the day hit 19,966 points. But the week ending December 16 failed to take home the prize.

Now, we’re really talking about margins in the tenths of a percent — chances are, the bulls will push through and breach the barrier. Interestingly, though, when the U.S. Federal Reserve announced in the middle of last week their unanimous decision to raise key interest rates, the markets rebounded on an intra-day basis, but failed to close above the prior day’s session.

Later on Friday, the financial sector had one of their worst performances since the American electorate cast their ballots. Truly, finance is the bellwether of the economy — if the big banks don’t do well, there’s not much chance of a stock market rally sustaining itself. Obviously, this is due to the fact that the majors finance virtually every industry. Without them, things just don’t work out too well. 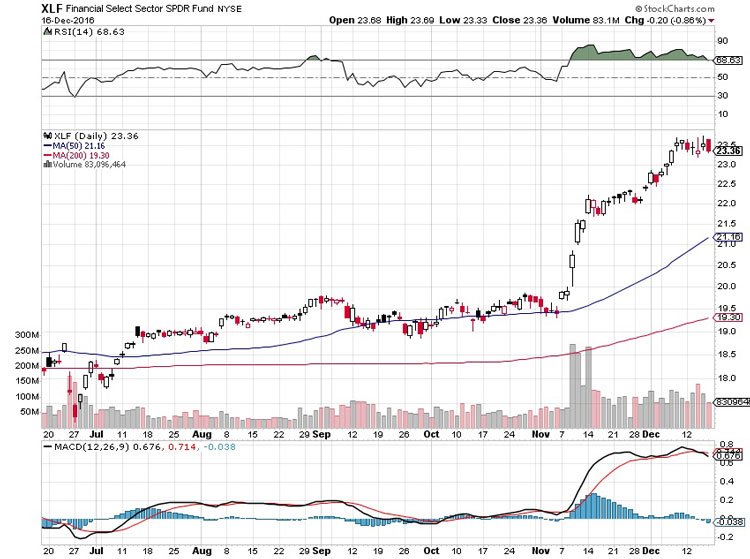 The Financial Select Sector SPDR Fund (NYSEARCA:XLF) dropped nearly 1% heading into the weekend. By itself, that’s not a cause for concern. What is concerning, though, is the lack of momentum after the Fed rate hike was announced. Theoretically — and this was proposed by Wall Street analysts — a rate hike would be net positive for banks as they can charge more interest on lending services. That, however, is a two-way street.

Banks have had trouble finding customers — as do players from almost every economic sector. That’s especially problematic when the banks are offering record-low interest charges. If that wasn’t compelling enough for potential clients, I’m not sure how higher rates would incentivize business. Call me crazy, but that would seem net negative for banks.

In other words, the thesis only works if the fundamentals of the economy are sound. There’s not too many analysts making that argument. No matter what the Fed does, that reality won’t change. And I’m not sure if “The Apprentice” star turned President-elect can do much, either.