Score one for technical analysis! Prior to Thursday’s announcement by the U.S. Federal Reserve that the monetary environment of artificially low interest rates would remain unchanged, I argued in my YouTube channel (starting at the 13:02 mark) that the chart for 10-year Treasury yields appeared to be forming a head-and-shoulders formation. Among forecasting patterns derived from the technical analysis discipline, the head-and-shoulders is one of the most widely regarded and is believed to have a high probability of predicting bearish outcomes.

For Treasury yields, bearishness is the equivalent of lower interest rates. As bonds are bought back under quantitative easing, older bonds with higher yields rise in value. Freshly issued bonds, on the other hand, will have to be discounted in order to make their lower yields more attractive to investors. And it appears for the most part that the markets en masse — whether consciously or subconsciously — believed that the Fed would continue the path laid out by former head Ben Bernanke.

Nevertheless, the response in the major indices was first apathy, then panic. On the day of the announcement, the Dow Jones Industrial Average gave up 0.4% in valuation — a mere drop in the bucket. The following Friday, however, the Wall Street community began to absorb the nature of the fundamentals, and all three blue-chip indices slid an average of -1.6%, with the Dow in particular moving back into correction territory.

Year-to-date, the venerable index is in the red to the tune of -8%, setting up an unusual relationship in the markets. Since the end of 2013, the velocity in capital gains potential in the major indices has dramatically declined, yet 10-year yields have also declined from a peak of 3% at the beginning of 2014, to a low of 1.68% in February of 2015. 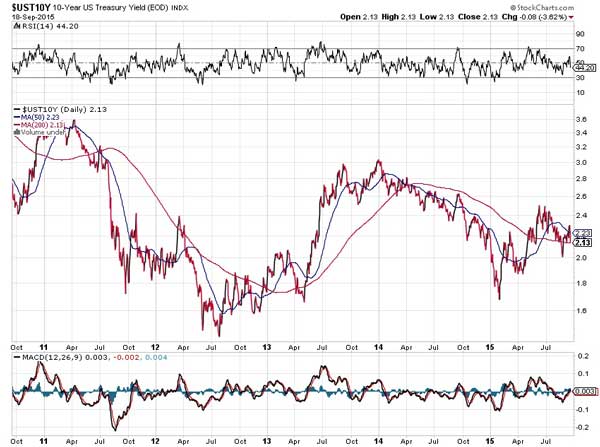 If we are to follow normal supply demand dynamics, real growth is aligned with low interest rates — passive income (ie. dividends) is eschewed in favor of capital gains potential, for which the blue-chip indices provided plenty of against the bottom of the markets in 2009. However, once the growth phase is over, the profitability phase replaces it. Capital gains are thus shelved for consistent annualized returns — stability stumps sexiness.

The problem with the Fed, however, is that they are promoting sexiness (high growth fueled by artificial inflation) when they should instead be upholding stability (profitability fueled by cost management and return on equity). Unfortunately, due to the unprecedented scope and magnitude of the Fed’s financial engineering, we have neither growth nor profitability.

Thus, the decision to introduce more chaos into an already chaotic system will breed more critical problems, not ameliorate them.