The broad equity markets are enjoying a much needed respite from the volatility that has wracked it since the dawn of the new year. The Dow Jones Industrial Average popped up 1.33%, or nearly 211 points on Friday’s session. This followed a 111 point move on Thursday, confirmation among ardent permabulls that the markets are finally on course for a rebound.

Further evidence is provided by the robust moves registered on Friday by individual companies. Most notable among the Dow 30 companies is Apple Inc. (NASDAQ:AAPL), which jumped 5.32% over the prior session. This equates to about $562 billion of market capitalization — a not insignificant amount, even for a company as massive as Apple. 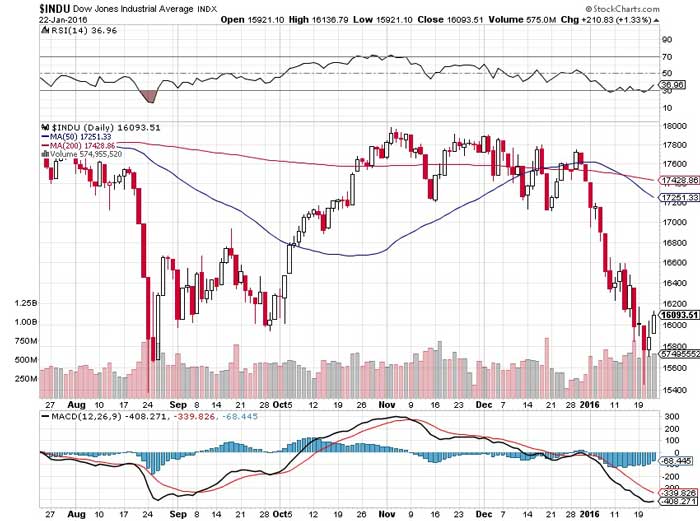 But looking deeper into the data, the recent surge isn’t necessarily the most confidence-inspiring. Year-to-date, AAPL is still in the red by -1.3%, which suggests that technical upside resistance will come into play after such a substantial one-day swing. More critically, AAPL is off last December’s peak by -15%, and against July’s highest close, Apple is down some -23%.

A company of Apple’s stature isn’t likely to tumble based on technical whim. There must be something fundamental driving the losses — and there is. Sales for the most recent iteration of the iPhone aren’t doing as well as expected, particularly in European and Asian markets. Blame the U.S. Federal Reserve, which took the nation off the monetary narcotic known as quantitative easing. The bottom line of the policy shift is a stronger dollar and weaker international currencies — good for American buyers, but not so much for their European or Asian counterparts.

We can thereby apply the same logic to the Dow Jones’ so-called recovery. Despite its significant achievement on Friday, the Dow is only up half-a-percent for the week starting January 18 — hardly a cause for celebration given that context. On a YTD basis, the Dow is still underwater at -6%. It will face a major hurdle to overcome its losses, and to build something positive for the year.

The irony here is that the recovery for individual names is transient in nature. As mentioned before, industry stalwarts like Apple are suffering a rough patch in their business — a factor that is at least partially attributed to American monetary policy. Yet for some time, we have heard from the mainstream media that the economy is strong enough to handle higher interest rates.

In theory, the logic is sound. Unfortunately, the economy isn’t driven by theory, a fact that may come to haunt investors that buy in too early to the current head-fake.