The Financial Markets are Playing with Fire!

Strangely, the historic “Brexit” vote is appearing to be the last true fundamental driver for the American markets before a much-anticipated correction. If the primary beneficiary of Brexit was just Britain itself, this would be more than understandable. Horrific policies that hampered the U.K.’s economic growth potential for decades will finally come undone. But why should that have a positive impact on western governments that have unfairly leached off this European so-called partnership?

The question is even more pronounced for the U.S. There’s a significant amount of geopolitical uncertainty, and that never is good for jittery investors. If a major trading partner goes down, there’s no way to avoid volatility given the interconnectedness of our world. And yet, the benchmark S&P 500 continues to set new records, seemingly unbothered by the turmoil surrounding it.

That ability to live in blissful ignorance may finally be coming to an end. On the technical front, the S&P index has clearly hit a plateau a few months ago in August. We saw a sharp drop in early September, followed by half-hearted, sideways trading. When the markets attempted to make another upside go at it, it failed again in early October.

This has created a “step-down” pattern, which is opposite of the “step-up” pattern that was seen in the precious metals complex for most of this year. The implication is obvious — the stock market is a fading superstar, while the metals market is a young upstart on the rise. 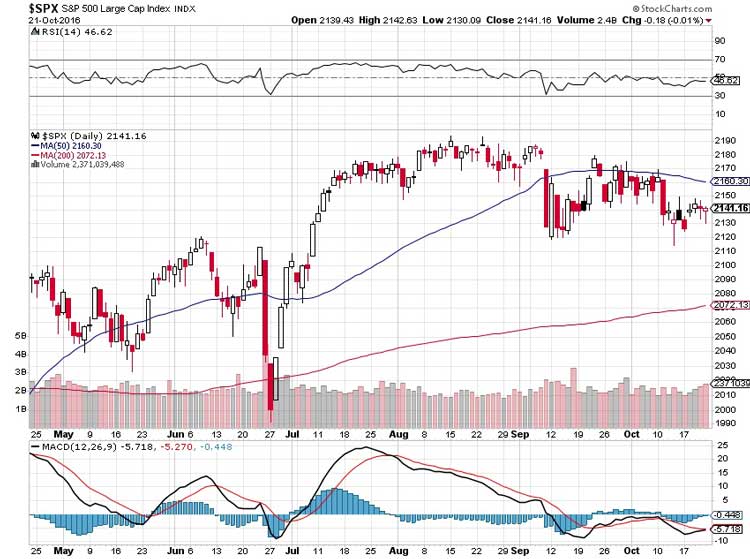 Another challenge facing the stock market is the strength of the U.S. Dollar Index. Against a basket of international currencies, the greenback has surged this month, and looks to break through the psychological 100-point level. Since the first day of October, the dollar index jumped 3.2%. That’s simply unbelievable given the equitable jump in inflation that we’re supposed to see.

Here’s the deal — the Obama administration has consistently and frequently told us that the economic recovery is well underway. Evidence is provided in the form of the jobs reports — big numbers supposedly across all sectors of the labor market.

But with the economy swinging as it is, where’s the money flow? More people with more money surely means more spending, no? I would imagine that with millions of Americans having been gutted in the 2008 financial collapse, most of them would be restless. They may not splurge on a boat, but surely, a small vacation, a few nights out on the town to celebrate are in order.

That’s not what we are seeing. And don’t say that I’m making stuff up! From an unbiased, technical perspective, the dollar index is not only rising, it’s flying. That implies higher demand for the dollar, and less supply. That’s a direct contradiction of the bullish jobs reports — more Americans supposedly have more money.

Now, unless there’s a “new economy” where demand and supply rise at the same time, and in the same magnitude, something’s up here. And that should worry all of us.