Don’t Be Fooled By The Dead-Cat Bounce: These Markets Still Suck!

If taken out of context, a passerby would assume that recent trading activity on Wall Street ended on a very high note. A recent Reuters article stated that after “a dizzying two weeks that saw a rapid plunge and rebound in equity prices, investors are looking forward to a week of economic data that may provide clarity on the likelihood of a near-term U.S. interest rate hike and help tamp down the market’s recent wild swings (emphasis mine).”

Note the ambiguity and the careful balancing of the terms used. First, a “plunge” is immediately followed by a “rebound.” Next, investors are “looking forward” to data that the U.S. Federal Reserve can use to justify a continuation of low interest rates and thus temper the “wild swings” of the markets. Without hard numbers, one could be forgiven in believing that the markets went back to equilibrium following uncharacteristic choppiness.

But nothing could be further from the truth. Objectively, the Dow Jones Industrial Average went into freefall between August 18 and August 25, or six straight sessions of losses which resulted in $2 trillion in market capitalization destruction. Yes, blue-chip indices bounced back, but the Dow is still in the red by over 900 points — hardly a cause for celebration. And it would be inaccurate to characterize investors as “looking forward” to economic data. If anything, they are soiling themselves. 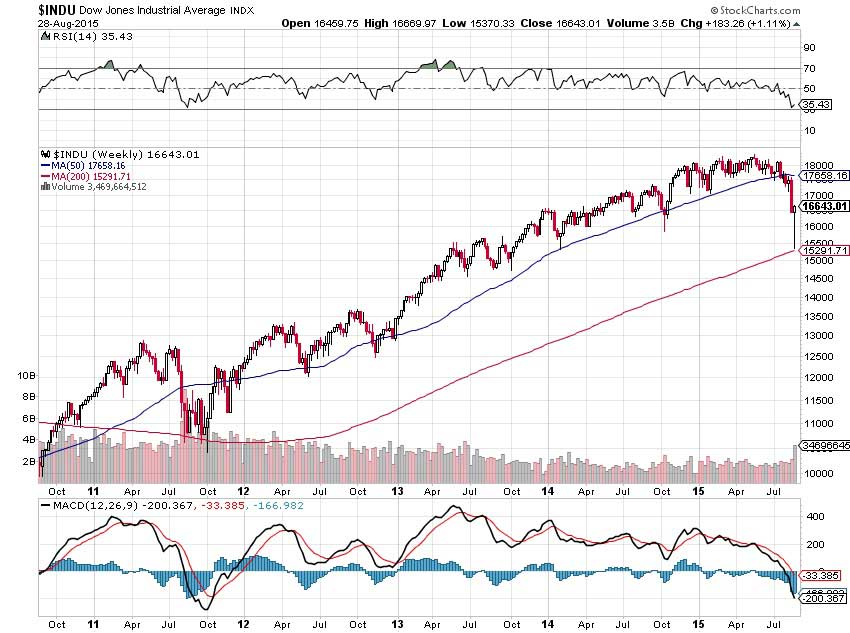 Perhaps a change of perspective would illuminate the issue. Looking at a five-year Japanese candlestick chart of the Dow Jones on a weekly basis — that is, each “candle” or unit of measurement representing a week’s worth of data as opposed to daily data — demonstrates the extreme magnitude of bearishness incurred on the week of August 17. It also shows how marginal of an improvement was made the following week — this is Reuter’s much-heralded “rebound.”

Such a puny response to the collapse of market stability is technically a troubling sign. It suggests for the most part that mainstream investors lack the confidence in beating upside resistance. The fact that Wall Street only managed two strong days after six consecutive days in the red tells us perhaps that the optimism surge was based on old open orders being actualized. In other words, the so-called rebound may have been purely algorithmic in nature and had no basis in fundamental reality.

What’s also startling for bullish investors of blue-chip equities — if there are any remaining — is that on a weekly chart, the current value of the Dow is split between its 50 and 200 day moving averages. Essentially, the markets are in a tug-of-war between the bulls and the bears, and with the collapse of demand seen in both emerging markets and the commodities sector, it would be a brave investor that chooses to go long — interest rates be damned!

In other words, don’t fret if you already panicked out of the markets earlier this week. It may turn out to be one of the best decisions you could have made for your portfolio!