During a high-level meeting in Jackson Hole, Wyoming, a week and a half ago, U.S. Federal Reserve Chair Janet Yellen gave the mainstream media the sound bite they were looking for. The economy (in her mind) was chugging along, and the labor market was for many months outperforming expectations. While not explicitly stating as such, it was widely speculated that an interest rate hike was coming sooner rather than later.

However, a peculiar thing happened in the bond market. The 10-year U.S. Treasury Yield picked up ever so slightly, then flattened out. Since the Jackson Hole meeting, the key interest rate has only gone up just shy of 1.5%. That is hardly the type of movement one would expect, considering the economic bullishness expressed by Yellen. Is this just a head-fake to steer the general public in the wrong direction?

Obviously, it’s hard to look into the minds of people you personally don’t know. Nevertheless, there are important clues that suggest globalist bankers are sending out a deliberately mixed message. First, these are experts in the field of economics. As much as they are derided by the alternative investment community, bankers didn’t get to their lofty positions by being idiots. 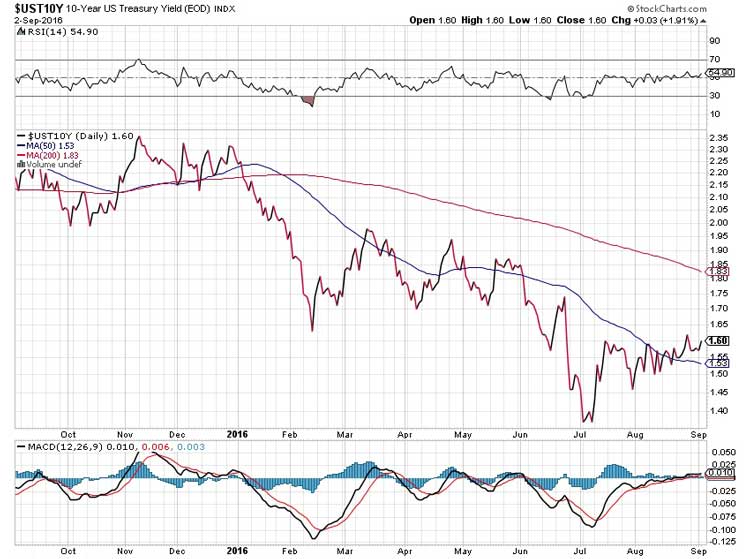 More importantly, the message and the data completely contradict each other. For years, we’ve accepted the notion of slow growth in gross domestic product at around 2% annually. But if the labor market is improving substantively, GDP growth should likewise be substantive. It makes zero sense to have robustness in labor, and not translate into broad, economic activity.

No, jobs are improving nominally. That means that more people are working, but the positions they occupy now are nowhere as prestigious as the jobs those workers once had. This thesis also makes sense, considering that static wage growth has been a mainstream-accepted phenomenon. That certainly isn’t surprising, since a robust recovery can’t sustain itself on Wal-Mart jobs.

We then realize why interest rates haven’t picked up following Yellen’s hawkish remarks. The economy can’t handle, and probably won’t be able to handle for some time, an interest rate hike. Further evidence is provided in the technical charts of the 10-year Treasury note.

Since bottoming in early July this year, rates have risen steadily to the level they are now. However, true upside momentum has been limited. The ensuing product is a classic bearish wedge pattern. That implies a higher-than-normal probability that rates will go down, not up.

If so, that’ll be a massive contradiction of Yellen’s earlier statements. It also underscores the true fragility of our economic foundation.