Is the Gold Market for Real? Technical Signs Say Yes!

We’ve heard this before — gold prices are making a comeback. Ever since the bubble in the precious metals complex collapsed back in 2011, commodity analysts have been forecasting a return to bullishness. The fundamentals were quite clear. No matter what the Federal Reserve did in their quantitative easing scheme, the economy on a substantive scale was not improving. Yet time after time, gold and silver prices showed promise, only to fade back under negative pressure. Why would this current period be any different?

It’s a fair question. In 2013 and 2014, we saw the gold market respond well to underlying weaknesses in the economy during the early months of the calendar. However, the Fed managed to jimmy up the broader equity markets, taking mainstream investor sentiment with them. With monetary policy specifically geared towards the stability of the Dow Jones Industrial Average, there was really not much gold and silver investors could do except grin and bear it.

But like any market cycle, it’s a rare event that a publicly traded asset’s trajectory moves only in one direction. Yes, markets can absorb periods of continued deflation or inflation, but normalcy bias is a dangerous mindset! What goes up must come down, and what goes down may eventually rebound — especially if the asset in question has intrinsic value. Since we know that gold and silver can’t be valued at zero, and because the conditions of fear and uncertainty are bullish for hard assets, it’s more than likely that at some point, the precious metals will have their day. 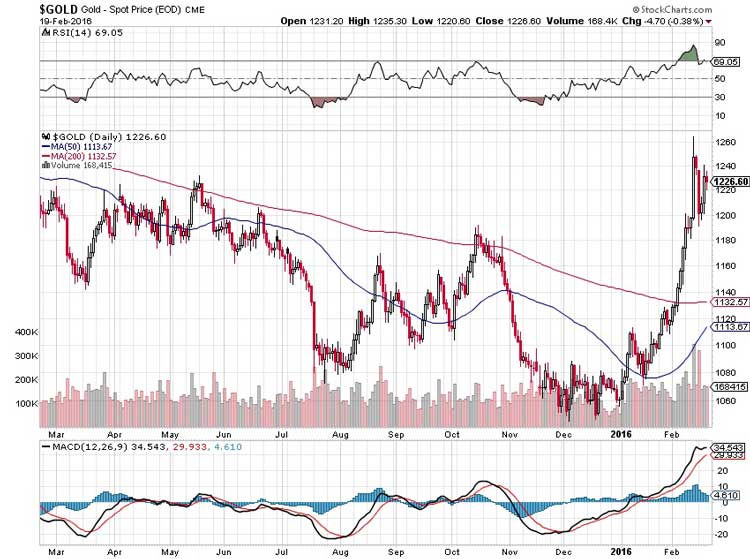 That day could very well be now. Unlike the early months rallies of 2013 and 2014, the current year’s rally in the gold market is sharp, almost violently so. In the aforementioned moves, bullish momentum was more measured and took place over a greater time period. In 2016, gold prices have jumped strongly for multiple sessions. A clear example of this is the fact that gold shot past its 50 day moving average in the first three days of the new year, and exceeded its 200 DMA in a little over a month.

Naturally, the next question is, can this ride be sustained? The answer points to the affirmative. Let’s address the obvious — assets typically don’t jump so high and so quickly based on nonsensical information. Second, the consolidation pattern that has emerged in the past five days (after a massive move on February 11) is encouraging. When the price action initially slipped, it didn’t close below the critical $1,200 level. Subsequent trading formed a pennant formation. Such patterns usually resolve themselves with a breakout, or a breakdown.

The next move of course is not guaranteed. But with all the fundamental evidence at hand — hint: global equity markets aren’t doing so well — it would be a hard-pressed argument to bet against gold and the precious metals.