Over the course of the prolonged bear-cycle in the precious metals complex, I had pondered as to the exact casual connection between fundamental catalysts and the resultant negative shift in sentiment. Nothing particularly stood out as to why gold and silver, traditional hedges against monetary inflation and economic entropy, had suffered as much as they had since April of 2013 until now. According to a personal discussion I had with a bio-chemist and investment market analyst, it was emphasized that the scope of fiscal engineering that the Federal Reserve engaged in necessitated uncertainty in the underlying economy: there’s no reason why gold shouldn’t be higher! The fact that bullion hasn’t risen to popular expectations inspired me to consider alternative explanations.

One of the caveats in the overall pessimism in the commodities sector is palladium. The rare and truly precious metal, which in physical appearance bears a strong resemblance to silver and platinum, has virtually no history as a monetary hedge nor is it commonly used as a defensive mechanism. Most people’s recognition of palladium probably centers around a London theatre or that weird thing that powers the Iron Man suit. Yet this enigmatic metal has return positive annual gains while every other asset in its class has been flushed down the drain. What gives?

Prior to the commodity crash in the spring of 2013, gold and palladium prices shared, on average, a strong statistical and correlative relationship. To borrow a phrase from the founders of the January Barometer, as gold goes, so goes palladium. This relationship took a sharp turn to the negative towards the end of 2012 and even more so during the peak of the aforementioned commodities crisis. The correlation shift is expressed mathematically in the below chart: 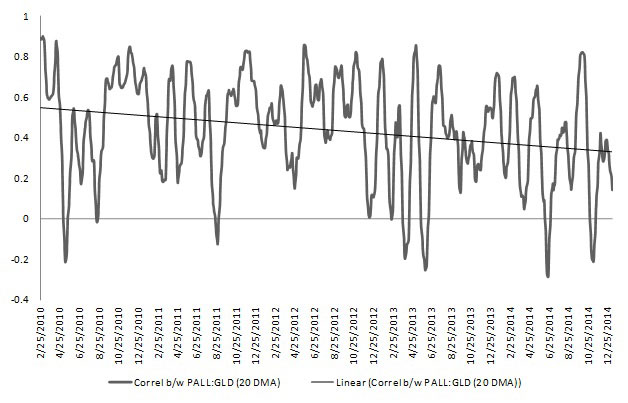 The overall correlative relationship between gold and palladium has declined significantly in recent years, with the current average correlation coefficient of approximately +0.20 too weak to justify a significant connection. What this means is that the price action of gold and palladium, at this moment in time, have no leverage towards each other. And that could be a very good thing for gold in 2015.

Recall that palladium return positive gains for years 2013 and 2014, an achievement that could not be duplicated amongst the other precious metals. However, gold and silver have started the new year on a relatively strong footing while palladium has corrected from its prior highs. If there was a strong correlative relationship between palladium and gold, both metals should be hitting bum notes. As it stands, gold is actually moving in an opposite direction from both palladium and the U.S. equities market. This makes sense considering that equities (and as a derivative, palladium, due to its industrial usage) have to “justify” their lofty valuations, while gold can do astonishingly well simply by regaining lost ground.

Unfortunately, we may never know exactly why the precious metals complex collapsed nearly two years ago. However, the changing relationship between gold and palladium may indicate a return to rationality and logicality towards the financial markets.