Gold bullion has been in the news recently and for all the wrong reasons. The oldest and arguably the most revered form of safe haven assets has lost an incredible 6% of value in the commodity markets, pushing prices down to lows not seen since the early months of 2010.

For that matter, the entire precious metals complex — silver, platinum, palladium — has been hit viciously by the bears. As expected, naysayers are out in full force, calling for the demise of gold and the idea of safe-haven assets. However, this may be a critically misguided sentiment.

First, the current decline is unlike previous selloffs witnessed in the precious metals. Typically, gold and silver would take the brunt of the damage due to their inverse relationship with strength in the U.S. dollar. Platinum and palladium, on the other hand, have not performed well but still maintain important industrial utility. For example, around 80% of annual palladium supply is used in the automobile industry for the production of catalytic converters.

However, the steep drop-off in the two industrial metals in conjunction with gold and silver suggest more than just technical dynamics in the markets. If global macro-economies are truly improving, we would expect to see an increase in general manufacturing productivity, and naturally, an increase in demand for highly conductive metals (ie. platinum and palladium).

That’s simply not happening. Platinum, though substantially rarer than gold, is actually trading a hundred dollars lower than gold’s spot price: in a word, completely ludicrous! More importantly, gold has traded roughly sideways throughout much of this year and it wasn’t until late June to early July that things turned desperately ugly for the yellow metal. Platinum, though, became an unmitigated disaster starting from mid-May. 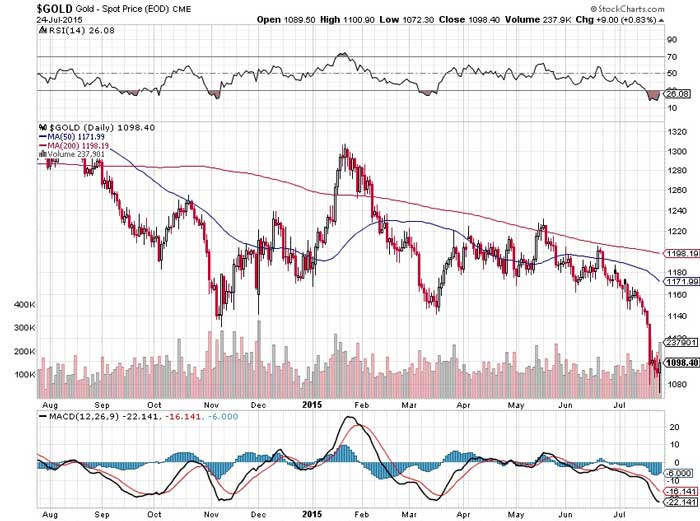 A second point to bring up is the dollar. The greenback would be expected to be touching multi-year highs with gold down to multi-year lows. Not quite. In fact, the dollar — taken from a longer-term perspective — is actually tracing a series of lower highs in the technical charts. As chart analysts would confirm, there is declining upper resistance that is capping positive momentum for the world’s reserve currency.

If that’s not sending chills down your spine, you may want to check yourself into the local mental hospital. Weakening dollar, lowered gold prices, and abysmal demand for industrial metals is not what economists would call a favorable combination. Who’s going to pick up the extra slack in supply of all manners of valuable goods? If the labor market were truly recovered — as has been reported by multiple mainstream sources earlier this year — more people should have more money, thus creating an inflationary trend as more dollars chase fewer goods.

Right now, the facts speak for themselves: less dollars are chasing more goods. The problem is, nobody seems to want them, thus driving the deflation even further down the line.