Amid the roaring noise of the markets and snowballing geopolitical events, gold prices have suffered a silent and pernicious retreat. Since peaking recently in mid-October of this year, gold prices have dropped more than 8% in value, putting their losses near the same ballpark as the Brent Crude Oil index over the same time frame. Yet on Friday, gold prices did what has been a rare occurrence in 2015 — jump higher. In fact, it was one of the larger single-day moves of the year, but the major question is, why now?

Employment data from the U.S. Department of Labor showed that the economy added 211,000 jobs for the month of November, satisfying many Wall Street analysts. Further bolstering optimism was jobs growth revisions, with 35,000 positions being added to the September and October payroll. According to industry experts, this all but sets the stage for the Federal Reserve to — finally — raise interest rates.

This all should be quite bearish for gold. Indeed, the precious metals sector in its entirety should be pummeled. Fear has always been one of the major catalysts for gold speculation and the absence of such fear — at least if we were to play devil’s advocate with the government-produced jobs numbers — is extremely conspicuous. 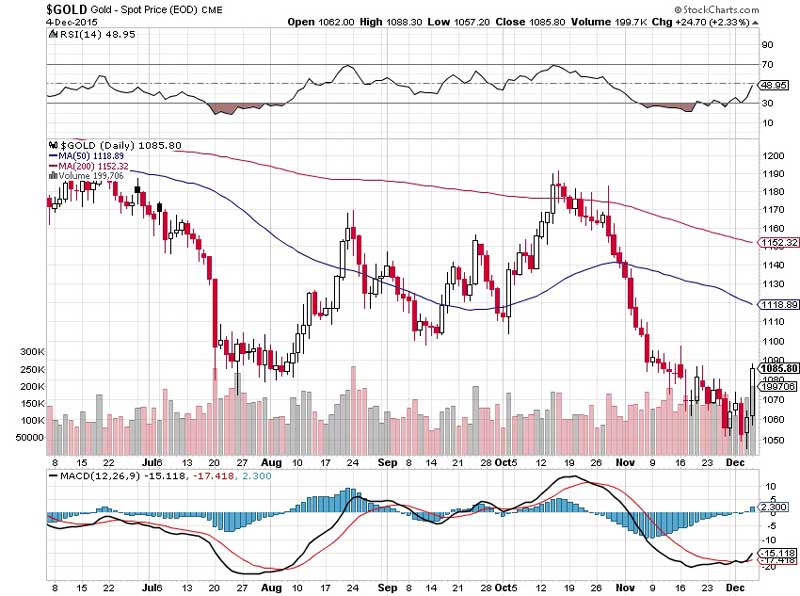 Silver had a tremendous jump on Friday as well, finishing the session at +3.4%. Again, this is a rarity for silver prices, which had free-fallen nearly 10% in the markets since mid-October. Although it’s not safe to look too much into one singular trade, it must also be noted that for both gold and silver, the volume was fairly high as well.

Unexpectedly, the Organization of Petroleum Exporting Countries decided to ramp up oil production in light of severe bearish fundamentals — and technicals — in oil benchmarks. That shocking decision meant that on Friday, all sectors of the S&P 500 gained except energy. Typically, gold traces the broader commodities sector, and such ugliness in a key commodity like oil would have negative implications for bullion.

Yet here we are — employment is up, confidence is back, the dollar is strong, and gold is … shining? To top it off, interest rates are almost surely set to rise at this point, meaning that the dollar should see even more strength. This is further confirmed by the fact that stimulus measures by the European Central Bank have been considered disappointing.

The jump in gold is far too unusual given the fundamental backdrop. Either fear is here or it’s not. Despite government statistics, circumstantial evidence suggests that large powerbrokers are making a move into bullion. What would be the need for gold if the economy is truly improving and the bond market would produce healthy yields?

Unless of course we were fed a bunch of lies. Then surely gold is one of the few safe-havens in a financial world gone mad.