Hammered through another round of fundamental news with bearish implications for hard asset investments, the precious metals complex found itself the victim of a stronger dollar and a resurgent labor market in the most recent trading session (March 6, 2015). Wall Street also took a beating, with the major equity indices posting average losses of 1.35-percent. Back in the hot seat is the Federal Reserve as investor sentiment shrank at the prospect of rising interest rates amidst positive economic data. However, if the economy is truly improving, sentiment towards the drivers of said economy (ie. blue-chip corporations) should also improve, regardless of interest rate fluctuations. The disconnect between the fundamentals and investment market performance will undoubtedly raise accusations of insider leverage or manipulation, especially in regards to precious metals.

The common charge of price fixing within the gold and silver market is that anonymous entities with access to large amounts of capital artificially depress valuations to “unnatural” levels. Such allegations conjure up images of market crashes of extreme scope. However, a statistical analysis of the Gold Silver Index (NYSE : XAU), one of the most widely examined precious metal indices, suggest something else is in play.

Similar to my work regarding risk assessment for the silver market, we must establish a proper framework to solidify an argument, in this case that gold and silver prices are manipulated. For that, we will incorporate risk quadrant analysis, which is the study of market returns (investor profitability) against market performance. The importance of this framework is that while financial price charts only occupy one quadrant of the Cartesian coordinate system, with valuation ranging from 0 to infinity, investor profits or losses occupy two quadrants of the aforementioned system. When market performance is involved in the analysis, however, all four quadrants of the coordinate system are utilized, providing a comprehensive study of market dynamics as it affects you, the investor. 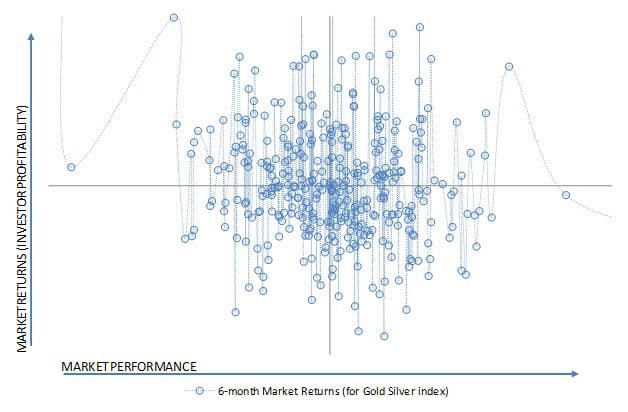 The results are illuminating and perhaps controversial. What risk quadrant analysis demonstrates is that the regardless of market performance (ie. bull or bear cycles), the probability of making or losing money is roughly the same. Furthermore, the absolute losses in the index have occurred during bull market cycles, although such anomalous losses are not dramatically outside the standard deviation represented by other large losses. In other words, is a 36-percent loss that significant when there were repeated instances of 30-percent losses? Weakening the argument for outright manipulation is that moments of extreme recovery are larger in scope than the losses.

So is it then safe to conclude that there is no manipulation in the metals complex? Not quite. What is peculiar to gold and silver markets is not the depth of alleged price fixing but the frequency. The above chart shows the dichotomy between frequencies based on market returns. When investors are losing money, the velocity of the market are consistently hitting similar targets. On the other hand, when investors are making money, the velocity is dispersed over a wider range.

The Difference In Consistency

Consider two professional baseball pitchers. Both have similar capabilities and arm strength, but one is able to throw pitches more consistently within the strike zone. All things being equal, the consistent pitcher would be considered the more effective. But in the case of the Gold Silver Index, the difference in consistency is 46-percent.

This means that when bearish traders take control of the precious metals market, the rate at which bullish investors lose money is 46-percent more consistent than when said investors make money. In other words, it’s not the single-day action of a menacing entity like J.P. Morgan hitting the sell button. Rather, it is in the millions of nearly identical trades that slowly drive out the long hands of the market. While the long-range sniper shot represents the sexiest imagery, manipulation is more likely hidden within the frequency of mundane trading.