With Holidays Upon Us, How Will Wall Street React?

Expectations were light for the markets last Friday, as Wall Street — along with scores of American families — celebrated the Thanksgiving holiday. Still, with sentiment buoyed by bullish trades following the aftermath of the late-August correction, the performance of the major indices on the last day of the week was emblematic of the pensiveness of the real economy. The Dow Jones Industrial Average ended the session slightly below parity at -0.08%, whereas the benchmark S&P 500 finished 0.06% above breakeven. This was in drastic contrast to October’s performance, which gained more than 8%. Which story of the stock market, then, are we to believe moving forward?

Apologists for the broad equities sector insist that the present recovery is a genuine one that can be sustained indefinitely. Nominal increases in job growth — specifically, the most recent October numbers provided by the U.S. Labor Department — are cited as prima facie evidence, while noting that the blue-chip indices have largely regained the losses sustained three months ago, in which more than $2 trillion in market capitalization was lost over a matter of days.

All the statements above are true. What is also true is that market performance over the last 30 days have contradicted said optimism. After starting the month of November with two up days, the broad markets suffered a mini-collapse, at one point threatening to penetrate its 50 day moving average — an often-cited technical gauge for short-term strength. As things stand, the Dow Jones is on course to post negative returns for the current month. 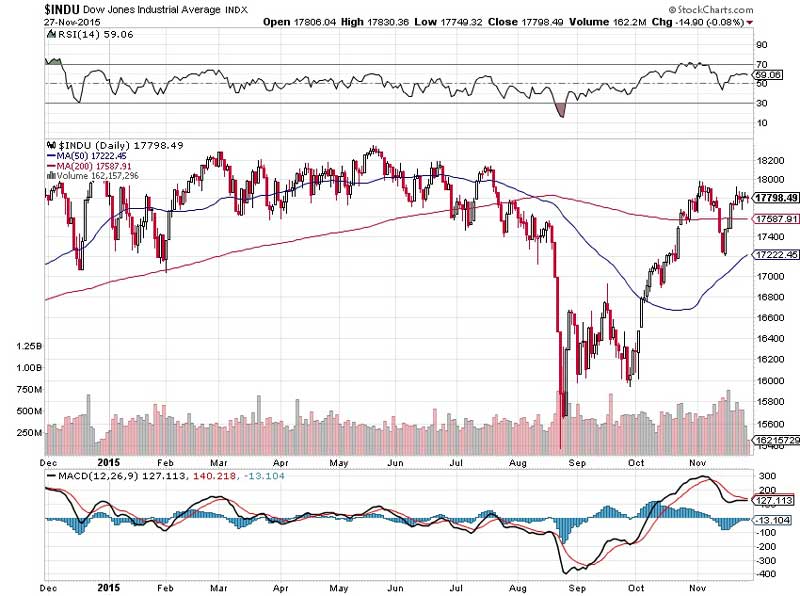 Yes, some months have a tendency of hitting the red, even in a strong bull market. And the Dow would only need to post a marginally positive day to be in the black for November. But this pensiveness also underscores the difficulty the equity bulls have had in converting bouts of optimism into a fully-fledged rally.

Nor have the fundamentals provided much room for confidence. In a recent Reuters article, retail industry insiders have already proclaimed this year’s Black Friday — the promotion-laden period where retailers traditionally make up the bulk of fourth quarter sales — to be disappointing. Brick-and-mortar stores had to battle declining foot traffic as well as a huge bump in online purchases. In addition, accounting and consulting firm Deloitte noted that several retailers have spread out their promotions across the entire calendar, thus de-emphasizing the importance of a singular Black Friday promotion.

The counterargument is that growth in online sales is encouraging. It is. However, what must be realized is that online retail is a disruptive business. Digital kingpin Amazon.com, Inc. (NASDAQ:AMZN) hasn’t posted consistent earnings over the past five years, and while it is on course to cash-out $328 million in net income, this figure would be far lower than results for either fiscal years 2010 or 2011. Net margins are also very much pressured for AMZN, meaning that indirectly, its business is in operation largely on the basis of high-volume sales — sales which have been cannibalized from brick-and-mortar retailers.

That may be good news for AMZN shareholders and employees. But as an aggregate whole, the retail sector has declined, leaving little room for many competitors. And that certainly does not bode well for the stock market at large.