Invest in China? A Critical Examination

Within the alternative investment community, the top three discussed themes of the financial markets for 2014, in no particular order, may likely be: the continued decline of gold and silver bullion, the sudden paradigm shift in the crude oil market, and the start of a new cold war with Russia. The poster boy of the contrarian mindset for its challenges of western economic hegemony and its alleged massive acquisition of gold, China has not had the same sentiment impact this year as has the aforementioned news items.

An obvious answer for why this has been the case is due to the United States’ and Europe’s concern over Vladimir Putin and his potential territorial ambitions. The saber-rattling from the Chinese is all bark and no bite, a sharp contrast to the “man of action” image that the Kremlin carefully constructs for its leader. Therefore, with much attention diverted to perhaps more pressing matters, one may be tempted to consider investment vehicles with exposure to the Chinese financial markets.

For the purposes of this article, we will be looking at long-term technical trends for the iShares China ETF (NYSE Arca : FXI), one of the most popular “Chinese investments” that tracks large capitalization company shares traded on the Hong Kong Stock Exchange. During the last three years, China’s broad market indices lagged behind their Western counterparts, particularly against major U.S. indices (Dow Jones Industrial Average and the S&P 500). This underperformance worsened significantly in 2014 as the S&P 500 ripped to new heights while the FXI fund remained largely range-bound, refusing to break resistance at its peak valuation established in 2011 until only recently. 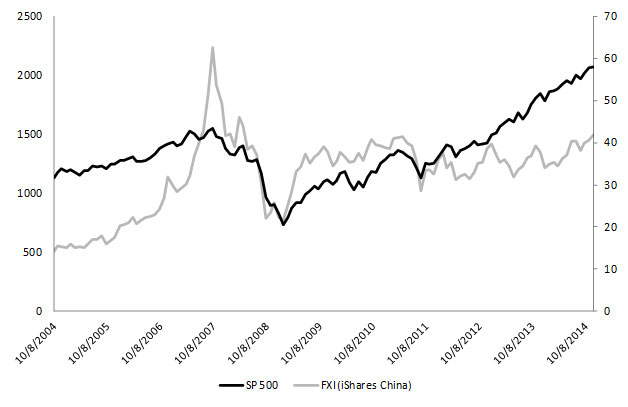 Those skeptical of the profitability potential of Chinese investments, like Stephanie Johnson of Market Realist, point to the unsustainable debt market trajectory, where overall credit has “ballooned from $9 trillion to $23 trillion over the last five years” (Johnson, Stephanie. “Why China’s credit-driven growth model is not sustainable”. Market Realist. December 3, 2014. Web.). This normally inflationary circumstance is instead producing a slowing economy and one that stands on the brink of deflation. If taken to its logical conclusion, investors should be running for the hills, or at least until the dust settles from the inevitable crash.

However, the technical trend indicates an opposite scenario. Over the life of the FXI fund, the price action is charting a series of higher lows, which suggests that the smart money is patiently pouring liquidity into the Chinese market. The same thing cannot be said for American large-cap equities, which suffered a devastating “V-shaped” collapse in 2008 and took the better part of five years to break-even from a valuation perspective. Also, volume in U.S. equities has been steadily declining since the bursting of the internet bubble in 2000, a condition that doesn’t spark confidence regarding its future sustainability.

Ultimately, the China question for 2014 is an extremely balanced battle between the fundamentals and the technicals. On one side, key economic metrics suggest that China’s credit market is lending money to weaker borrowers, an indication that the country’s shadow-banking industry, or credit-creating entities that operate without regulatory oversight, may be pushing funds irresponsibly. A parallel situation occurred with the sub-prime mortgage crisis in the U.S., leading to financial wreckage that is still being felt today. On the other hand, the technical charts speak to investor stability and the potential challenge of all-time highs, the potential result of a cyclic rotation away from overbought Western equities and into undervalued assets.

At the end of the day, money talks and something else walks!