January Down: Will The Rest of The Year Follow?

The hallowed forecasting methodology that is the January Barometer has both proponents and skeptics agreeing to at least recognize the model as a springboard to advance their own opinion of market trajectory. Developed or “discovered” in 1972 by Yale Hirsch, perhaps best known as being the co-author of the Stock Trader’s Almanac, the January Barometer’s premise is bluntly clear: as January goes, so goes the rest of the year. Prior to the 2008 global financial crisis, the Barometer earned a reputation for alarming clairvoyance, accurately predicting general trends in the major indices to the tune of approximately 90-percent. Since the crisis, however, this fabled indicator has stalled with a series of mixed performances, although proponents may be quick to point out that the long-term accuracy is still very high. As January has closed in the red, should investors take a cue from the Barometer or remain steadfast in the equities bull market?

Before we dissect this question, one should be aware of the common statistical adage, “correlation does not equate to causation.” Until there is proof (or at least good evidence) that the month of January is the catalyst for future market trajectory, the only definitive conclusion that we can draw from the Barometer is that it is an unusual coincidence. Further, the established fact that large-capitalization equity markets in the United States has an upward bias necessarily means that structural defaults within the financial system will lend itself to patterned discoveries that result in predictabilities that are better than 50/50.

In dismissing the methodologies of the Barometer, one should not ignore its conclusion. While the Barometer’s accuracy in general is subject to question, this does not impugn that its prediction for the rest of 2015 is flawed. By formula or by fortune, the equity markets could be on the cusp of a bearish cycle. In order to solidify and strengthen an argument, however, we need science. 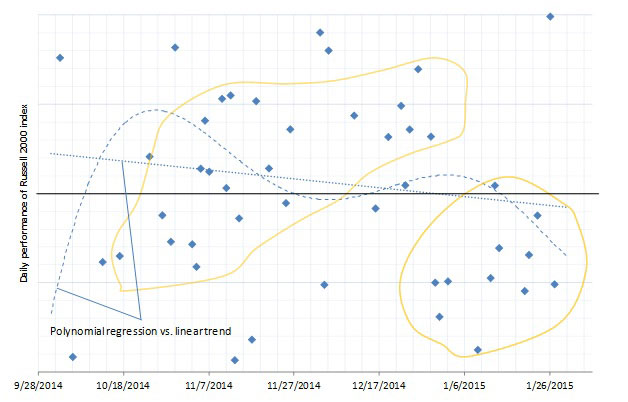 Above is a scatter-plot analysis of daily market performances for the Russell 2000, which as a small-cap index provides a better picture of the real economic condition of our nation. For both aesthetic and functional purposes, extreme swings in sentiment have been ignored, focusing instead on the “meaty” portion of the market, or movements that are within ±1%. This helps to identify on a broad basis which directional trade (whether bullish or bearish) is winning the battle for control.

As highlighted in the larger circle, bullish trades were heavily concentrated between November of 2014 and early January of 2015. Beginning in the first full week of January, a gap suddenly developed in this concentration, with subsequent trades having a decidedly negative slant (smaller circle). This explains why the linear, or algebraic trend is negative, while the more data sensitive polynomial regression indicates a gradual deceleration of momentum. The technical shape of the Russell 2000 and also that of the S&P 500 index is unstable and characterized by sharp fluctuations over a tight range. The totality of the data indicates uncertainty amongst traders, a potential sign that those who end up on the wrong side will find their wallets massively lighter.

Fortunately, we don’t have to rely on a calendar to recognize these crucial indicators.