Looking Beyond The Jobs Report Circus

Although the data sourcing is much criticized, the official story remains the same — the labor market, despite some concerns, is trending upward. The latest release from the U.S. Department of Labor confirms this mainstream assessment. The economy added 255,000 non-farm payroll positions, exceeding analysts’ expectations. Better yet, May and June reports received upside revisions, presenting a more robust picture than previously advertised.

That may seem like great news for Wall Street and Main Street alike. The major equity indices jumped about 1% from the prior session. Traders were evidently shedding their risk-off attitude as this latest jobs report was the second consecutive time that the data trumped expert forecasts. This also presents an atmosphere of optimism that could potentially impact the upcoming presidential election.

But is everything all that it’s cracked up to be? Those that have been reading alternative news reports that the economy is actually terrible would be forgiven for allowing doubt to creep in. Admittedly, the doom and gloom stories that often circulate the world wide web are sounding awfully repetitive.

As with any investment opportunity, it’s important not to chase the news. What is popular in the media now reflects the immediate status. More likely, the broader trend is ignored or deflected in order to push an editorialized agenda. Broader trends, though, are long-forming by nature, and the reporting of such is bound to appear repetitive. 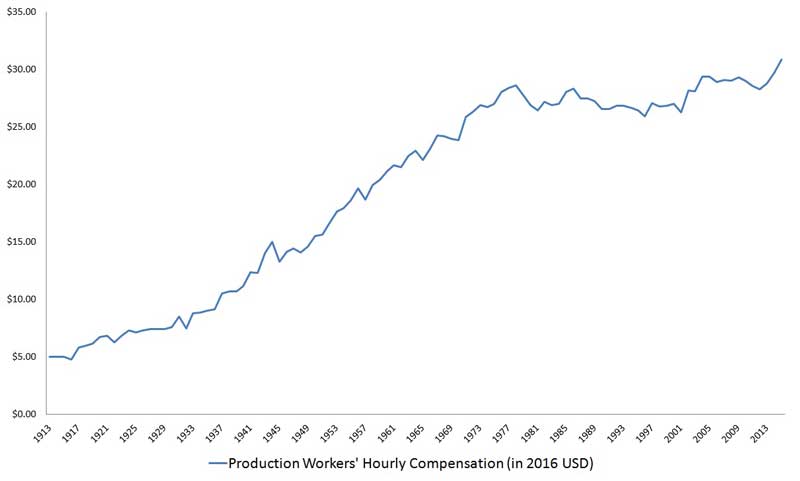 Over the course of 40 years, that 10% wage growth amounts to a quarter of a percent per year. Never mind the actual statistics that go into what is considered “inflation.” The reality is that every year, the prices of core consumer goods, whether that’s the gasoline you pump into your car, or the cost of higher education, continues to move higher by a wide margin. At 0.25% wage growth, there’s no point in working for wages!

That’s the big disconnect. Yes, jobs are increasing nominally; in some cases, better than the most optimistic estimates. But all that these new jobs are doing is either pushing wage growth down, or keeping it the same. After all, there’s no way to improve wage growth unless the accompanying salaries also rise.

We are creating an economy that only looks good on paper; eventually, that could very well be a recipe for future disaster.