Light At The End Of The Tunnel For BHP Billiton And Industrial Commodities?

As tough as the commodities sector has been in general over the past few months, industrial mining giant BHP Billiton Limited (ADR) (NYSE:BHP) has weathered the storm as well as can be expected. Up over 6% in the markets year-to-date, BHP’s senior management team is certainly not short on confidence, providing backing for a spin-off organization called South32 Ltd. Originally intended to “house BHP’s unwanted manganese, aluminum, nickel, coal and silver assets,” South32 may in fact enter into the mergers and acquisition arena later this year, buying up companies that will add value to the overall BHP umbrella.

On the other hand, Billiton may be forced to take its own medicine as South32 may invite potential suitors of its own due to the organization’s low debt levels. Although no confirmation of interest has popped into the markets yet, a likely scenario involves an official bid being placed as soon as South32 is publicly listed on May 18 in Australia — Billiton’s native country — as well as South Africa and the U.K.

Budding events within the industrial metals complex begs the question: is a recovery within commodity markets imminent? Just what do these execs know that justifies their moxy? 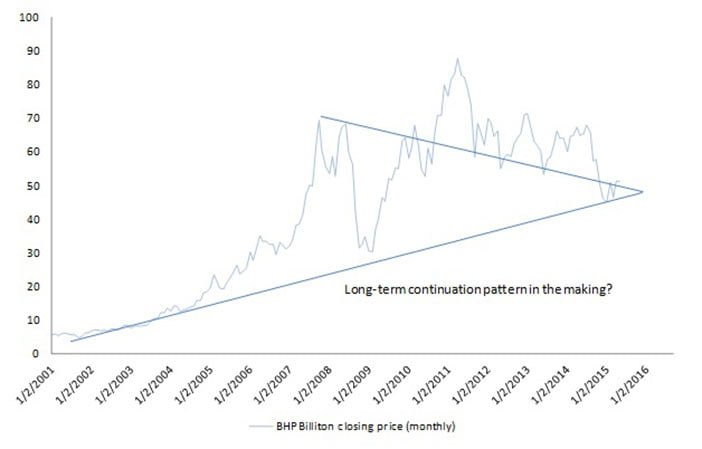 From a technical analyst’s perspective, there is an intriguing long-term pattern in development, known within the discipline as a pennant formation. As part of a broad category of market formations defined as continuation patterns, BHP stock’s price action has formed a triangular shape pointed in the direction of the overall bullish trajectory. This implies an increased probability that the next cycle of trades will push BHP’s stock price higher.

Coincidentally, Billiton shares have hit what can be described as a statistical “sweet spot.” Over the course of the past 90 days, BHP averages 0.49% in monthly performance rate. In such circumstances, there is a 65% probability that over the next three months, BHP will move higher, with an average return of 8%. The probability was calculated based on market returns that resulted from similar monthly performance rates as to what is currently seen.

But before diving right into Billiton, it should be noted that shares have fluctuated wildly this year. Measuring peak to trough, there is a 23.4% variability over the past four months that many investors may find disconcerting. Although the commodities market does, on a general basis, indicate signs of recovery, individual investors must be cautious: it’s still an environment where a wrong move at the wrong time can cost you quite dearly.

The bottom line, though, for long-in-the-tooth resource investors is that behind the volatility, Billiton seems amped up to spark a new direction for the company. This ultimately may lead to exciting reverberations for the rest of the complex.