The Market Has Barely Corrected — And That’s A Problem

The S&P 500 index closed last Friday at exactly 2,052.32 points. This means that for the year, the equities benchmark has only gained 0.6%. In other words, this is a horizontal market. Fundamentally, the blue chips have been stymied by a very tough earnings season. In particular, the laggard that is the retail sector continues to contradict data that the economy is in a recovery mode. Internationally, China’s slowdown — both in their exports as well as in their consumer market — has dragged the global economy. But a little appreciated technical factor may be foretelling a sharp correction in the major indices.

With the lack of momentum in the stock market so evident to all, the bearish prognostication isn’t exactly unpopular. However, it does have its critics. Those that have a long-term bullish forecast on the S&P claim that we’ve already had a series of sharp corrections — first, in August of last year, where more than $2 trillion of market capitalization was lost over a matter of days, and second, the correction that accompanied the start of the new year. Both were similar in terms of the “paper dollar” amount lost, and both yielded a relatively quick comeback.

But despite the bullish response in those corrective events, the overall trajectory of the market is bearish. The rally following the August 2015 correction peaked at 2,109.79 points. The comeback from this January’s fallout peaked (so far) at 2,102.40 points. In order to qualify as a true recovery, the market should register new highs. 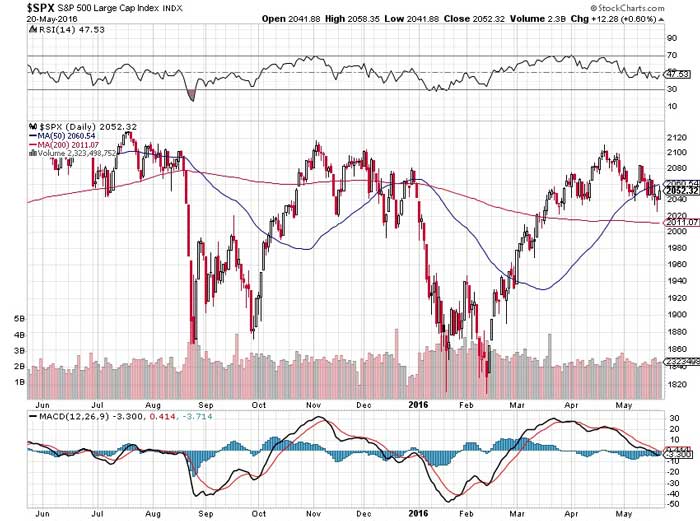 Analysts are also failing to point out that should the S&P 500 remain soft as it is, there’s a high probability that it will register two consecutive quarters of year-over-year losses. That hasn’t happened since 2009. And before that, all the quarters of 2008 absorbed YOY losses averaging nearly -18%.

The natural presumption is that consecutive quarterly losses tend to result in future volatility. But it’s a little more involved than that. In most occurrences where there are such quarterly losses, the percentage amount of lost returns is fairly steep. For example, in 2009, Q1 and Q2 returns averaged -37.4%. That, in a word, is horrendous. However, that’s exactly the point — corrections are supposed to correct the upward movement of a stock or asset. They are mechanisms that seek equilibrium. Equilibrium can’t be reached, though, if the correction is only minor in scope.

And that’s the problem — so far this year, quarterly losses average -2.7%. The last time consecutive quarterly losses were so small was in 1977. Back then, Q1 and Q2 averaged -2.3%. Also, in 1973, Q2 and Q3 averaged -2.5%. However, these small losses in the 1970s set up larger losses the following year. The point here is that a market needs to “suffer” sharp losses to correct big gains. Like death, the markets won’t be cheated. Take the pain now, or take it later — one way or another, the bears will have their say.

So no — the argument that the markets have “already corrected” simply doesn’t hold water. If long-biased traders don’t find ways to protect themselves now, it could get pretty ugly, pretty quickly.