When Will The Market Bubble Burst?

Situation critical. That would be the apt description of the global financial markets as it stands now, and worse, where they will most likely be in the months — perhaps years — to come. How people respond to current events today will determine a great portion of the trajectory of their tomorrows. Some will take defensive action against the incoming tidal wave. Fewer still will take steps to profit from it. But for a vast majority, they will tragically, and simply, stand still.

Indecision is often the worst decision one can make, even more so than taking the wrong path. This concept doesn’t just apply to the financial markets but to almost every life circumstance. At least with an incorrect decision, one has the comfort that he or she exercised freedom of will. But indecision is acquiescence — to circumstances, to outside factors, to other people’s actions.

The fork in the road is already upon us. One has to make a choice, and ultimately live with the consequences. Let’s take a look at the facts.

Last Friday, the major indices of the U.S. markets all tumbled hard, averaging more than -2.4% in losses. The Nasdaq Composite Index was the primary laggard, giving up more than -2.7% of valuation. This is especially noteworthy as the Nasdaq, in comparison to the Dow Jones Industrial Average or the benchmark S&P 500, carries some of the more speculative industries, such as technology and commodities.

Now, no one is surprised about the commodities sector any more. The resource sector, especially energy, has been wholly gutted over the past year. Recent trends shows no sign of abatement, as crude oil indices continue to break below multi-year records. But since the U.S. has long ago transitioned from a manufacturing powerhouse to a service-oriented economy, the decline of favor in “intangible” industries like tech is quite disconcerting. If we lose service, what then do we really have? 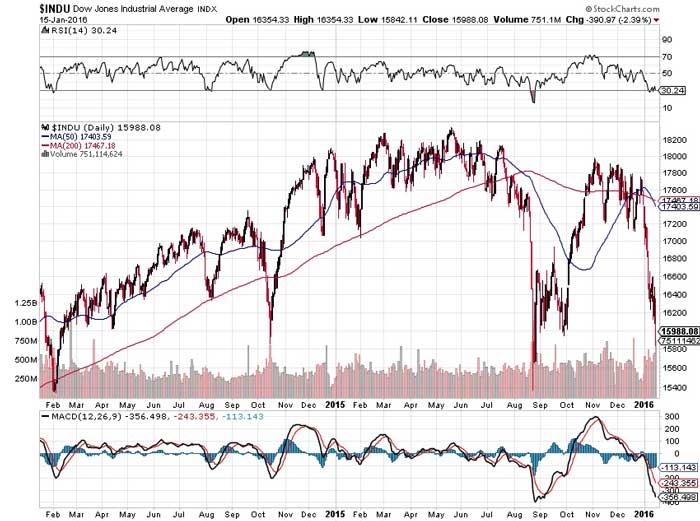 But the damage is certainly not limited to isolated sectors. The Dow Jones lost -2.4%, or 391 points, on Friday. That was enough to drop the index below the psychological threshold of 16,000 points, a milestone first achieved back in November of 2013. Yes, that means we are moving backwards, but there’s an even more critical point here.

There were three pronounced dips since the correction that occurred in the summer of 2014. All three dropped to near-16,000 points, but one actually broke the plane to 15,666 points — on August 24, 2015. If the markets lose another -2%, the Dow will once again sit at that ignominious level. This time, though, there may not be an emergency rebound.

Consider the fundamentals. North Korea just recently tested a hydrogen bomb, and threatened the U.S. to boot. Islamic terrorism is out of control, with incident after incident spreading like wildfire throughout the globe. Back home, Americans are more polarized than ever before, and this is not just centered on politics. We are fissuring, but the sanctity of our financial institution may be the least of our problems.

When will the markets burst? Looking at all the factors, one can surmise that we are already there. Now, the question is, what will you do about it?