Having finally breached positive territory — albeit by a very small margin of 1% — the benchmark S&P 500 index appears to be cleared for takeoff, or so the equity bulls would have you believe. Although the recovery from the broad market correction initially sparked on August 18 was fairly impressive and went against several bearish forecasts, the effort expended in regaining lost point values is also suspect. The present market condition is therefore far from stable and still presents a viable threat against would-be investors.

First and foremost, we must consider the difference in velocity between the August correction and the ensuing rally. In one week, U.S. indices overall lost more than $2 trillion, or roughly 12% of the nation’s gross domestic product. It took more than two months to recover the losses — and if we’re being particularly persnickety, the indices have yet to fully recover, since the markets are still down against the August 18 session. 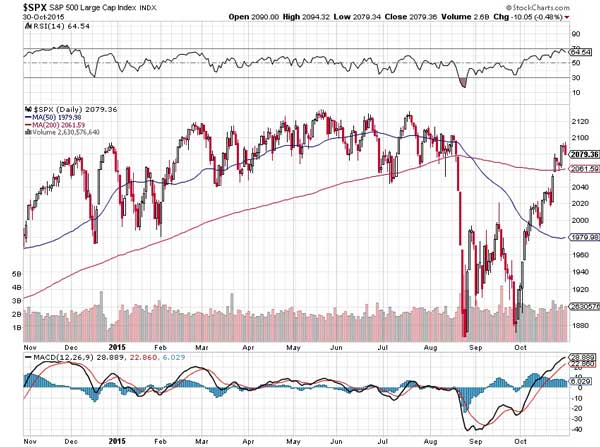 The shifting tides of sentiment between bullishness and bearishness bring to mind the concept of turbulence, or what PBS describes as the “random, chaotic motion of air, caused by changes in air currents.” Turbulence from the perspective of air travel comes from multiple sources, including thunderstorms, wind patterns over mountain ranges, and even from the plane itself. The reality is that whenever flight is involved, turbulence is an inevitability. The critical difference between it being life-threatening or merely an inconvenience is acknowledgment of its power, and taking appropriate countermeasures.

The latest news out of the Asian markets suggest most global central banks are doing neither. Chinese factory activity went into the red for the eighth straight month in October, according to the most recent purchasing manager’s index (PMI) report. In addition, China’s manufacturing sector overall contracted against forecast in October, doing so for the third straight month.

Japan’s Nikkei 225 index took the brunt of the damage, falling more than 2% on Monday trading. This follows news on Friday when the Bank of Japan unexpectedly diverted from its dovish policies, chipping away slightly at the more than year-long rally in the U.S. dollar. The bearish implications of the Chinese data did nothing to help the cause for the greenback, as more safe-haven demand buoyed the strength of the Japanese Yen.

Taken as a whole, the U.S. markets still has some work cut out for it. As noted by international technical analysts, the uneasiness towards macroeconomic fundamentals will likely trigger profit-taking. Such selling action would not normally take place if investors believed that there was more money to be gained. Instead, they are rushing for the exits almost as soon as they entered their positions, thus creating the ugly volatility that we have witnessed in recent months.

Until rational economic policies become the norm, we will continue to be held hostage by the random whims of market traders. Unfortunately, the financial radar points towards more choppy skies ahead.