With Markets Down, All Eyes On The Federal Reserve

Will she or won’t she? It’s an otherwise inane question often found in the rambling rants of pre-pubescent YouTube channels or the lovelorn lyrics of a corporate-produced boy band. However, in Wall Street’s case, the implications of whether or not U.S. Federal Reserve chair Janet Yellen will pull the plug on her predecessor’s quantitative easing program will have substantial reverberations throughout the global economy.

Markets everywhere have generally been gutted due to a fundamental and technical factor, with both catalysts linked to China. The most conspicuous factor is the technical one. After several months of speculative trading in which the Shanghai Stock Exchange Composite Index gained over 54% year-to-date for 2015, the insanity finally abated — but in a very pernicious manner. Since the peak of the Shanghai index — in mid-June — the Chinese markets have lost 38% of valuation. The step-down pattern left in the wake of bearish trading — which features a flat-lining consolidation before another steep selloff — suggests that further pain is still to come.

The second factor that is perhaps underappreciated by the general public is the fundamental one — the decline of Chinese economic activity. Most mainstream media sources cite a downward trend in China’s manufacturing output as a sign of its fading strength. But with so many cities and skyscrapers left abandoned in the vast territories of the Asian powerhouse, a better question to ask is whether they had any strength at all. Though this may sound at first glance to be a conspiratorial line of thinking, The Wall Street Journal — an extremely mainstream source if there ever was one — posed essentially the same inquiry.

Simply put, global markets have taken a beating because the blue-chip companies upon which the equity indices are based have no demand for their supply. China was a go-to source for every mid- to large-sized firm that had international expansion plans, but that story is soon coming to an end. Nor can the emerging markets complex take over, since the commodities collapse devastated most developing nations’ economies — which are largely dependent on energy and natural resources exports. 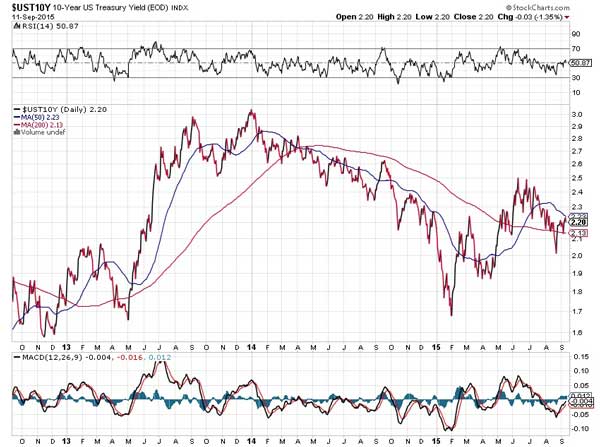 Assuming that interest rates weren’t already low, the natural course of action for a Keynesian central bank is to buoy the economy with artificially pumped liquidity. Interestingly, from a technical analysis perspective, the yield on 10-year U.S. Treasuries don’t appear bullish at all. In fact, between February until the present time, an analyst can make the argument that interest rates are charting a bearish head-and-shoulders pattern, one of few market patterns that are widely recognized as having a very high probability rate.

Sadly, whatever Yellen decides to do, nothing will change the fundamental flaw in the global economy — she can’t fix what’s not there. The painful reality is that we do not have a supply problem that can be cured with an interest rate modulation, but rather, a demand dearth.

And that’s something that can’t be papered over.