Should Markets Expect A Santa Claus Rally This Year?

As we prepare to send off 2015 in spectacular fashion — with what else but bountiful inebriation? — one particular question has come up in recent weeks: will we see a so-called Santa Claus Rally this year? While children the world over anticipate gifts under the tree from a jolly old fat guy, investors are looking to get ahead of the new year by buying up stocks with strong return potential. Indeed, the Santa Claus Rally is a thing, a phenomenon of surging stock prices in the week between Christmas and New Year’s Day, according to Investopedia.

There are many theories as to why stocks supposedly have a tendency of rising in what is essentially the last week of the year. The most obvious from a financial or utilitarian perspective is tax implications — many benefits gained from the last day of the year is, according to the tax code, just as good as if the action in question occurred throughout the entire year. Then there are less quantifiable and more anecdotal explanations, such as general happiness during the holiday season and increased magnitude for consumerism, including stocks and other financial assets.

Whatever the cause, there are certainly a wave of people that believe in the Santa Claus Rally — enough so that the phenomenon is studied and where research continues to be conducted in order to find further clarity in the matter. Perhaps there are many investors that simply assume that the Santa Claus Rally exists as its own prima facie evidence. But what do the unbiased numbers state? 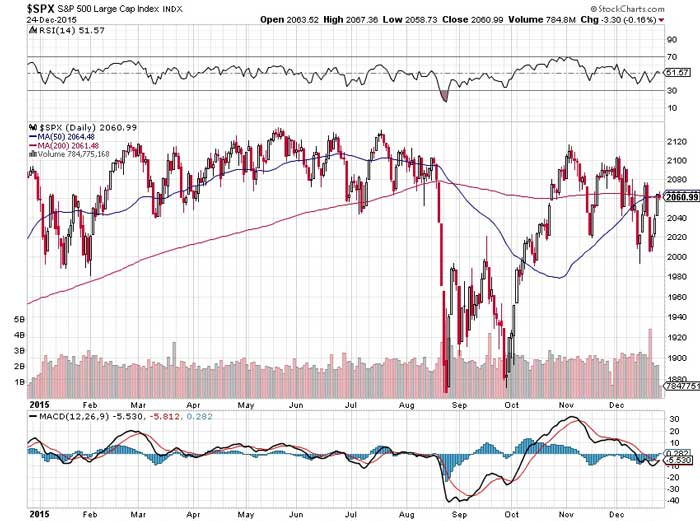 This is not a directly contrarian article simply for the purposes of being contrarian. The Santa Claus Rally, at least defined as a tendency for stocks to move higher, is real. Since 2000, the benchmark S&P 500 on the last week of the year has rallied nine times out of 15, giving it a base probability of 60% that we’ll see a bullish rise in stocks this year. Furthermore, the aggregate magnitude of all the final weeks of the year is tilted positively at 0.65%. In theory, if all you did was to buy stocks at the start of the final week of the year, and then sell it at the end of the week, you should come out on top.

However, life doesn’t work in theories alone. The 60% “success rate” of the Santa Claus Rally is only based on a small data sample. Of course, we could expand the sample, but we risk overlooking critical factors such as macroeconomic cycles and the role of advancing market technologies in determining the true basis for the Rally.

More worrisome for equity bulls is that since 2005, the final week has produced more losers than winners — six weeks have produced losses averaging 1.6%, versus four positive weeks gaining an average of 3%. It should be noted that the biggest final week was a gain of nearly 7%, registered in December of 2008. That, of course, was a knee-jerk rally based on bottom-buying behavior from a severe market collapse. For the most part, Santa Claus Rallies have been fairly muted, if not disappointing.

Looking at a technical chart of the S&P 500, it’s difficult to see the price action break out of its bearishly slanted trend channel. But if it were to do so, it would need something a lot more powerful than a market phenomenon that is quickly running out of steam.