The Media Is Hoping for a Comeback That’s Not Coming

It must be a pleasant thing to be a leftist sympathizer. On Friday, the Wall Street Journal screamed with their headline, “U.S. Economy Roars Back, Grew 2.9% in Third Quarter.” But within a few lines, even they admitted that it doesn’t really do anything to change the overall dynamic of the economy. No matter how much the spin doctors spin, the American public relies upon two economic metrics — government reports and their own gut feelings. Right now, the gut is telling a whole different story.

According to WSJ’s Eric Morath, “Gross domestic product, a broad measure of goods and services produced across the economy, expanded at an inflation- and seasonally adjusted 2.9% annual rate in the third quarter, the Commerce Department said Friday. That was stronger growth than the second quarter’s pace of 1.4%. Economists surveyed by The Wall Street Journal expected growth at a 2.5% pace for the July-to-September period.” In other words, that’s a 16% jump against forecast.

The implication is that things are on the right track. More importantly to the individual American worker, it speaks to the potential of higher wage growth and better opportunities. That should improve the leverage of Democrat Hillary Clinton’s marketing machinery.

Yet, as rival Donald Trump has repeatedly stated, the current economic phase is the slowest recovery in the modern era. With vastly more people in the U.S. than in prior generations, we need more than a substandard recovery. As Morath acknowledges, “The latest data ‘do not point towards a new growth path but rather a strong rebound following one year of soggy growth,’ said Joseph Brusuelas, chief economist at consulting firm RSM US.

Furthermore, the latest jobs report was anemic. Trump himself commented on it, stating that the weak figures would help him drive home the point that Washington has economically failed its constituents. Certainly, if underlying growth is so robust, we should see it in the manifestation of bigger and better jobs. 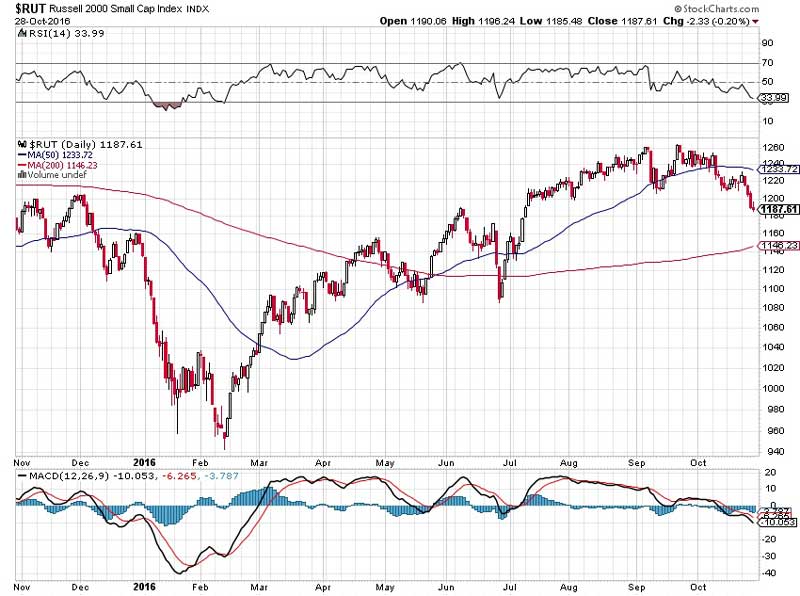 We’re not — and we’re not going to at the current trajectory. Look at the benchmark S&P 500. Blue chips have been sliding in a bearish trend channel since the end of August. And the earnings reports that have been released throughout this year have not been broadly impressive. If the economy is growing, that means our companies have to be profitable. That’s not what is happening.

Further, I think we should pay particular attention to small capitalization companies. They are on the front line of the economy, and they are especially sensitive to fundamental drivers. Since small caps are far more dependent on outside financing, their trajectory is an early warning mechanism.

What we see is pretty discouraging. The Russell 2000 Small Cap Index has lost 6% of market value since September 22. It dipped well below its 50 day moving average. If bullish momentum doesn’t arrive soon, small caps could face a wave of painful selloffs.

Even if that doesn’t happen, the risks are enormous. There’s a huge disconnect between manufactured statistics and the actual underpinnings of the economy. That would not be a recipe for success.