Natural Gas Revival In The Markets?

The natural gas market is one that has been notoriously difficult to call, and even more notoriously volatile. Since “going parabolic” in the early days of 2014 — when the natural gas spot price hit an intra-day high a penny shy of $6.50 — the index, along with the rest of the commodities sector, quickly tumbled down. Current valuations peg natural gas at a 55% discount against its 2014 high, confirming the deadly consequences of being on the wrong side of this trade.

Despite the ugliness in the markets, natural gas is in the early stages of a possible comeback. Year-to-date, the spot price is down -2.4% in the red — not a great performance, obviously, but a significant improvement over the -15% YTD performance it was incurring a few short months ago in April. And since the opening month of spring, natural gas has so far not incurred a new low.

Technically, there may be a short-term bullish opportunity to trade here. The relatively smooth, “bowl-shaped” descent of the natural gas spot price since November of last year is suggestive of a rounding bottom formation. Featured in John J. Murphy’s excellent market study resource, Technical Analysis of the Financial Markets, the rounding bottom is generally a bullish technical pattern. 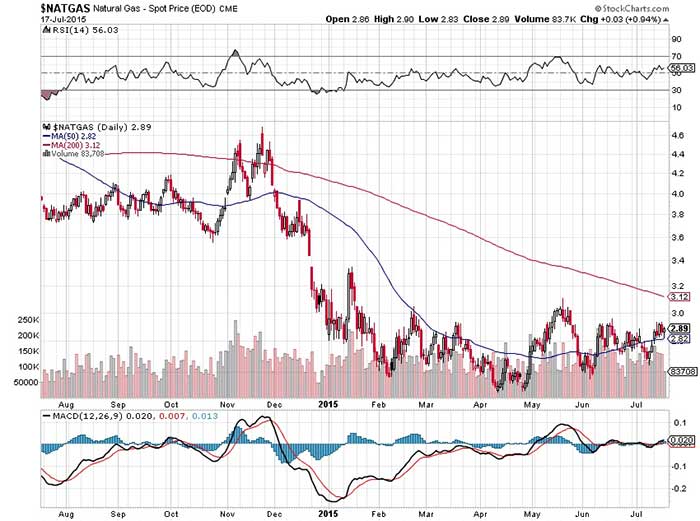 After an initially steep selloff, the velocity of bearish activity gradually begins to decline in a controlled manner. As the last of the bears exit their short positions, the bulls re-enter the market, slowly at first, but the buying later intensifies. This is confirmed through the technical charts as the price rapidly shoots skyward at the culmination of the pattern. In essence, the bulls retrace the bears trading activities towards opposite ends. The result is a pattern that looks like a cereal bowl, hence the name “rounding” bottom.

Should this pattern play out, speculators could be well-rewarded. Since the initial selloff occurred when the natural gas spot price hit approximately $4.40, that level would represent a logical target for the bulls. Percentage-wise, that’s a 52% swing against current market value — and the timetable for this pattern to breakout explosively is soon, perhaps inside two months from now.

As for a long-term opportunity, there are still many questions regarding natural gas’ fundamentals that make it suspect. For one thing, several independent oil and gas companies have been absolutely gutted this year, and that situation may not abate regardless of what happens with the energy sector due to non-commodity related issues, like poor management or insolvency. Also, as noted by the U.S. Energy Information Administration, the demand structure for natural gas in the current economic environment is not necessarily conducive for growth.

For those wanting to take the speculative plunge, there are several exchange-traded funds that track natural gas, including United States Natural Gas Fund (NYSEARCA:UNG).