Is Oil Market Setting Up a Crash? Comparative and Technical Analysis Viewpoints

The ugliness of the crude oil markets took a much-needed reversal, and energy producers worldwide are breathing a collective sigh of relief — for now. Year-to-date, the international benchmark Brent Crude Oil has definitely moved into positive territory, up 8%. Most of the gains accrued just recently, with Brent adding a massive 26% of valuation over the trailing month. Publicly-traded oil stocks, particularly independent oil producers, have garnered the most gains since then, but will such a favorable circumstance continue to hold this fragile market?

Mainstream financial analysts have their doubts. Bill Baruch, chief market strategist of iiTrader, expressed concerns about the technical posture of the oil markets during his interview with Yahoo Finance. Baruch notes that rallies have stagnated at upside resistance, and that long-term averages may continue to hinder oil bulls. In addition, U.S. shale companies are still producing oil at a prolific rate and that will contribute to an already severe supply glut.

We can also look towards individual oil companies to confirm this bearish argument. Take Exxon Mobil Corp. (NYSE:XOM) as a prime example. As the world’s leading oil company, XOM has weathered the storm better than others, with share prices up 8% YTD. However, the technical context of XOM’s gains this year raises a red flag. When you look at the price dynamics for XOM since mid-January, the valuation has gone up while volume has trended downwards. 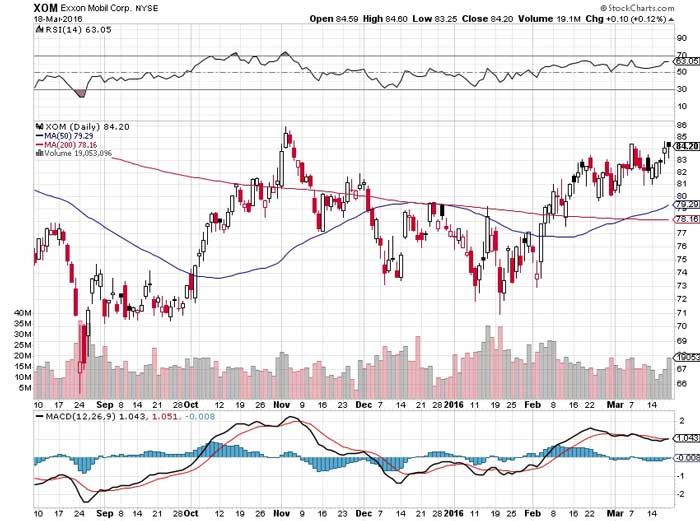 Why is this a problem? For starters, you want to see volume leading the markets, not the other way around. Volume surges — especially with large publicly traded companies — most likely indicate the arrival of institutional money. This is the type of bullish money that not only drives the markets, but also demonstrates commitment in the trade. Weaker volume is probably an indicator of retail money, or individual traders hoping to make a quick buck. While such volume can move markets — as we see with XOM — the optimism runs the risk of being short-lived.

We can further test this theory by looking at XOM’s institutional ownership. The big money has been progressively leaving XOM over the past several years. At 32.25%, institutional ownership at the end of 2015 is roughly half that of the ownership level in 2000. Whoever is buying XOM at the current market value is, as a comparative ratio, not the major players.

You can also look at the short interest of XOM’s float, or the percentage of XOM’s outstanding shares held short. While the actual number of short positions is relatively small, the ratio has been rising over the years. That doesn’t mean that XOM will collapse, but it does confirm that the current oil rally is not as strong as one would be led to believe.

While industrial and rare commodities are making a comeback, the oil market in particular is suspect — tread this sector with great caution.