The Physics of the Gold Market

Just what is going on with the precious metals market? After turning in a remarkable performance for much of 2016, gold has started to lose some of its luster. The yellow metal was slammed earlier this month for reasons not well understood. The benchmark S&P 500 index turned in its usual ho-hum performance, while crude oil has been steadily gaining. If anything, gold should trade sideways. Whatever the cause of recent volatility, investors are facing legitimate concerns.

The first thing to point out is that gold prices are still technically riding a bullish trend channel. It is, however, on the bottom end of the range. What the precious metals complex needs now is a robust move, something to buy itself some time. Otherwise, it hangs precariously, and that invites trouble from the short traders. That’s an immediate risk that needs to be considered before pulling the trigger on gold as an investment idea.

But to get a clearer picture of gold, we have to appreciate what a different animal it is compared to other assets. Thanks to its trading dynamics and its unique role as a barometer of economic health, there’s a lot of variables that go into gold prices. As such, we need better tools for analyzing the precious metals.

I believe the discipline of physics, specifically kinematics, or the study of motion, can offer tremendous insights. What it can do in this case is provide a quantifiable framework of the personality of the gold market. 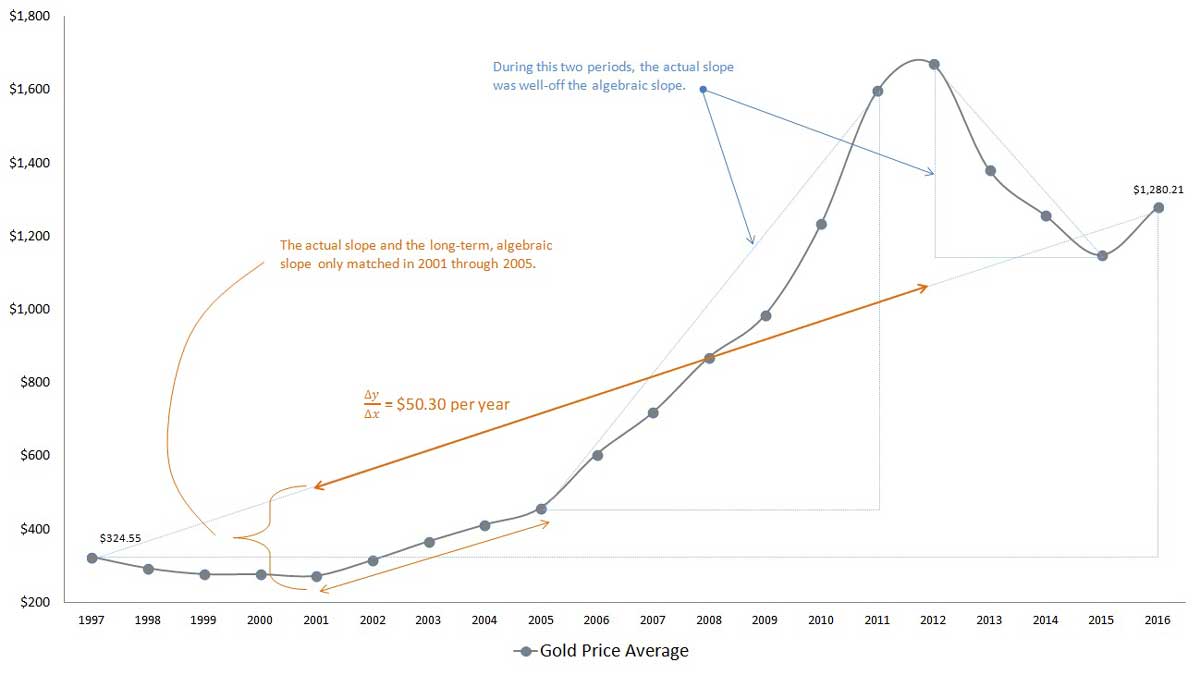 In physics, the slope of a position-time curve (in our case, a price-time curve) is the speed over a given amount of time. What our calculated slope tells us is that, on average, between the years 1997 and 2016, we can expect the gold price to increase by $50.

For example, between 2001 and 2005, the actual slope (speed) of gold prices were almost perfectly linear, and therefore, in line with the long-term average trend line. However, the rally that took place between 2005 and 2011, and the collapse of 2012 through 2015, saw a radical shift in the angle of the slope.

What that tells us is that we’ve already seen extreme enthusiasm, followed by extreme pessimism. Now, the gold market is more or less in equilibrium. This implies that it can continue its course of steadily building gains (as in the period of 2001 through 2005) before possibly experiencing another bull run sometime in the future.

Of course, there’s lot of negativity surrounding the precious metals at this point in time. Much of that is reactionary and understandable. Nevertheless, it would be a mistake to completely dismiss gold because of recent setbacks.