I am a conservative. At the same time, I understand that — as a direct consequence of the de-facto two-party system in the U.S. — there are nuances to every political debate, especially when it comes to money and economics. One nuance is supply-side economics, more popularly known as “Reaganomics.” Named after President Ronald Reagan, this economic policy called for tax-cuts for the rich. In theory, this would engender revenue growth, and the benefits would “trickle down” to the middle class. In practice, the end results of Reaganomics came at a steep price.

Using commonly accepted metrics, Reaganomics appears at first glance to be a resounding success. During Reagan’s full term, growth in U.S. gross domestic product jumped 28%. This dwarfed preceding President Carter’s GDP growth rate of 8.7%, and was nearly twice the growth generated by the Nixon administration. In addition, the Dow Jones Industrial Average was a veritable screamer, gaining 135% during the Reagan White House. The last time the Dow Jones grew triple digits during a Presidential administration was in the Eisenhower years, a fellow Republican. 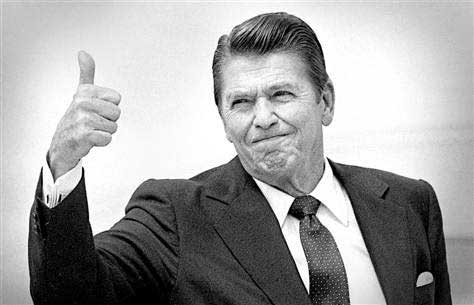 Much of the success of Reaganomics was attributed to then Federal Reserve Chair Paul Volcker. A Democrat that was first appointed by Carter and later reappointed by Reagan, Volcker helped to reign in massive inflation rates that were unprecedented in the post-World War II era. This time period coincided with the Iranian oil embargo, which created a sharp spike in gasoline prices due to reduced supply. The pernicious nature of the economy guaranteed that Carter would be a one-term President.

Reagan came in with a promise to rejuvenate the economy and he did just that — at a price. During his two terms in office, Reagan tripled the size of the national debt from $1 trillion to $3 trillion. We of course are still paying for this debt. However, it’s been widely accepted that every politician will raise the debt — arguably, you could say that the national debt issue has grown blasé.

Still, today’s conservatives talk about being a “Reagan conservative” — as if it was a distinguishing factor. It’s not. Merely, it’s a high level form of robbing Peter to pay Paul. Over the course of his presidency, the U.S. Dollar was devalued by nearly 24%. This was slightly better than Carter, who devalued the currency by nearly 26%. However, the rate at which Reagan devalued the greenback was half that of Carter, due to the latter having one term in office.

That said, Reaganomics is no different than any other economic policy, as they all lead to further destruction of the dollar. Look at President Clinton — he devalued the currency by 16%, and created GDP growth of 32%. Both the Bushes saw the dollar’s value crumble by double-digit percentage points. No party — Democrat nor Republican — has pushed forward an economic plan that didn’t involve some level of Keynesian theory.

This is not to say that voting doesn’t matter — I believe that it does. However, when it comes to economic policy, it’s important to pay attention to the details. Often times, we’ll discover that it’s not who is in control of the country, but who is in charge of the money.