One Reason Why The Economy Sucks — Not Enough People

It’s a common mantra heard in mainstream academia, and even among alternative-truth communities — there’s too many people on this planet. On the surface, it sounds more like an economic equation rather than a nefarious agenda of depopulation. Too many people equates to a drain on limited, finite resources. If the numbers are pulled too strongly on either side of the equation, the system is no longer sustainable.

Many institutions and even international agencies have taken up the cause of population control. Perhaps the most notorious example is communist China, which for decades has aggressively enforced a “one-child policy.” Closer to home, we talk about “sustainability,” “green earth initiatives,” and “reducing carbon footprints.” These mantras are essentially population control under a different name. Whatever the case, the underlying message is clear — there’s too many of us, so we have to minimize resource usage.

But what if the opposite was true? What if instead of population growth being a burden — and in some cases, a threat — it was an asset? Many elitists are quick to point to the liabilities of population growth because of the implied resource consumption. Yet they fail to account for the assets of such growth.

Let’s take retirement as a prime example. Many critics argue — and rightfully so — that the baby boomer generation will eat up what’s left of social security and other government welfare programs. The younger generations will barely have anything left when it comes time for them to collect their check, if there’s anything remaining at all. Using the same mathematical logic of population control advocates, we can state quite clearly that working people are needed to fund the older generations’ retirement benefits. 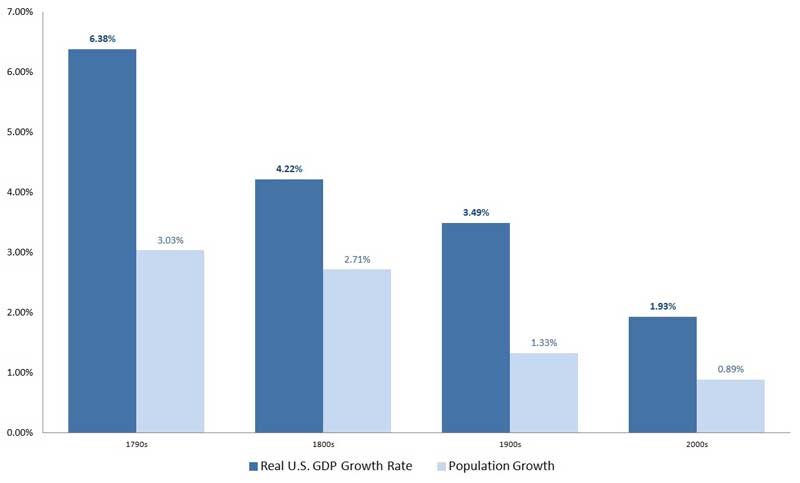 Here’s another often-missed fact — an economy can’t grow without people to grow it. During the 1790s decade which was the first complete decade for the U.S. after the Revolutionary War, gross domestic product in real terms increased an average of 6.4% every year. Population wise, the country grew at an annual average rate of 3%.

But from the 1800s onwards, GDP growth on average has continued to decline. Throughout the 19th century — which had significant economic contributions such as the Industrial Revolution — average GDP was 4.2%. In the 20th century, the average fell to 3.5%. In the 21st century so far, the average is a paltry 1.9%. This decline more or less follows population growth trends, which fell from 2.7% in the 19th century to 0.9% in the current century.

Mathematically, there is a 91% correlation between GDP growth and population growth. However, that’s just being overly technical. What we face today, and will especially be a challenge tomorrow, is the fact that there are not enough qualified people to work the economic machinery. The over-reliance on technology, as well as the destruction of traditional family values, has created an environment where this situation will likely worsen with time.

So while policymakers may argue about the nuances of the economy, the answer might be very simple. We need more families to produce morally strong and virtuous contributors to society.