Recession-Proof Industries? Not in Sin City!

For years, we have been sold the Great Lie by the Great One — President Barack Obama will move mountains to improve economic conditions back to where it was prior to the Great Recession, and apparently, he has succeeded. However, a genuine recovery would involve a lifting of all, if not most, boats. This is something that we are clearly not seeing. Consumer confidence fails to inspire, demand for discretionary items continue to fall, and wages remain stagnant, if not outright decelerating. The conflict between fantasy and reality has imploded quite brilliantly with the so-called “sin industry” of gambling.

Las Vegas is set to lose another iconic member in the form of Caesars Entertainment Corp. (NASDAQ:CZR). Just recently, a federal judge refused to protect casino company from creditor lawsuits seeking up to $11 billion. That’s a nice way of saying it’s “lights out.” On the day of the judgment on July 22, 2015, shares dropped 13% of value in the markets. Despite the massive selloff, in reality, this is akin to a drop in the bucket for CZR stock, which has lost 67% year-to-date.

It’s hard to imagine that just a little over a year ago in the first quarter of 2014, CZR was trading hands at over $20 per share. Now, the market value is around $5, and the pain is really just beginning — good news for the bears, not so much for long-time shareholders.

Here’s the reality: people just don’t have the luxury to throw down money in the casinos anymore, and that includes the high-rollers. Competitor Wynn Resorts (NASDAQ:WYNN) — which is relatively in a much better financial situation than Caesars — had little to show for in its second quarter of fiscal year 2015 earnings report. WYNN missed on both earnings and top-line sales, and this was impacted both on its Macau division as well as its Las Vegas division. In other words, the failure to bring in money wasn’t just as a result of China’s crackdown on gambling corruption cases, but it also stemmed from a domestic miss on forecasted revenue.

Perhaps the situation won’t bother Wynn Resorts, which has an upper-class appeal and is sure to attract a more affluent client base. The same can’t quite be said for Caesars, which has a broader appeal towards the middle-class — the very class that is under attack by government policies and the present economic malaise. 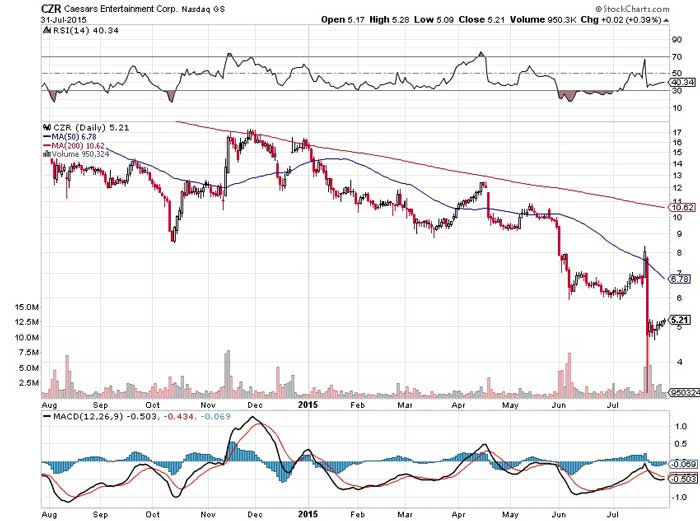 The fundamentals will surely continue to filter over into the technicals. CZR stock has traversed a step down pattern since peaking in early 2014 and there is nothing that the bulls have engineered that suggests anything resembling a substantive recovery. Currently, CZR is below both the 50 and 200 day moving averages — key barometers used to measure short-term and long-term sentiment, respectively. Other indicators that specifically gauge trading momentum — such as the Moving Average Convergence-Divergence and the Relative Strength Indicator — are flashing oversold conditions.

This is no time to be a contrarian, however. CZR has nothing going for it to suggest anything other than a quick swing trade. To believe otherwise would be downright sinful.