Despite the domestic indices settling lower for the final trading day of last week — due primarily to fears of a bubble in Chinese equity markets — it’s been a remarkable series of trades, particularly for the Nasdaq Composite index. A day earlier on June 18, 2015, the tech-centric index broke a 15-year record, a legacy born of the late-1990s internet boom.

On March 10, 2000, the Nasdaq hit an intra-day high of 5,132.52. Soon after, the index collapsed, along with the other counterparts in the Dow Jones Industrial Average and the benchmark S&P 500, victims of what would later be termed the popping of the internet bubble. Additionally, an economic crisis and the horrific tragedy of the September 11 terrorist attack would quickly spiral American stock markets into depths unprecedented in the modern era.

At the time — and even as recently as a few years ago — the idea that the Nasdaq would approach the aforementioned threshold, let alone exceed it, was a pipe dream. Yet here we are: with a new intra-day record of 5,137.36, the Nasdaq barely squeaked by the prior record, but surpass it, it did. The obvious question, then, is whether this is another fluke like it was 15 years ago, or if investors can expect further momentum in the future. 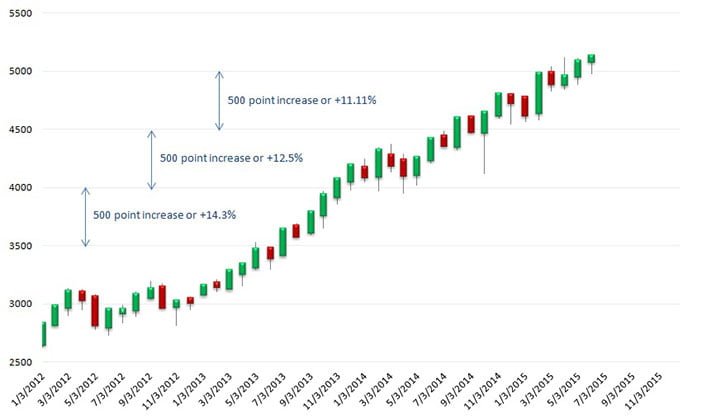 The first challenge for the bulls is the law of large numbers. Should the Nasdaq continue to add points to its tally, it would need to do so in a progressively larger velocity to match the magnitude of previous gains. For example, there were three 500 point-swings over three recent time periods: July 2013 to December 2013, December 2013 to August 2014, August 2014 to May 2015. But despite the fact that the three time periods increased by the same point total, the percentage moves are different: 14.3%, 12.5%, 11.11%, respectively.

As the index moves higher, it becomes more difficult to provide the percentage gains that long-term investors are used to. That’s not just semantics: if investors aren’t as profitable for the same asset, they would eventually look to other markets for higher returns. Wall Street is a what have you done for me lately? entity. In a world of high-frequency trading, loyalty to an asset would be considered downright archaic.

Notice too that the time period to move the Nasdaq 500 points has likewise widened: 5 months, 8 months, and 9 months, respectively. While this is not indicative of an imminent collapse, it does suggest that the current bull market phase is becoming long in the tooth. We also must recognize the psychological aspect of professional trading. No one wants to wait a year to make 8% returns if they can achieve similar returns over half the time period.

The feat achieved on June 18 is certainly a respectable one. Few anticipated its occurrence, making the event that much sweeter for domestic equity proponents. But signs do suggest that the Nasdaq as a whole is decelerating; if so, equity bulls will make higher probability trades by being selective as opposed to investing in the broad indices.