This year’s Halloween has been a frightening affair for U.S. markets. The benchmark S&P 500 index dropped 2% since October 31. However, the real issue is that since early September, the major indices have failed to provide upside confidence. The markets are clearly inside a bearish trend channel, and fundamentally, there doesn’t seem to be many factors that would provide optimism.

This is especially true when we consider the rise of the U.S. Dollar Index. Even though the greenback also took a hit post-Halloweeen, the index is still threatening triple digits. That’s going to be a significant headwind as domestic companies will face an unfavorable currency dynamic. Also pressuring circumstances are international currencies. Foreign central banks have no qualms about reinvigorating their economy through Keynesian policies — the U.S. Federal Reserve be damned!

For those needing the markets to go higher — and thus, requiring a weaker dollar — Bloomberg has some discouraging data. According to their report, “History suggests November could be another strong month for the U.S. currency. The Bloomberg Dollar Spot Index advanced nearly 1 percent on average since 2006, the best performance after May’s 1.1 percent increase. The greenback is already coming off its strongest October since 2008 on increased chances that the Federal Reserve will raise interest rates by December.”

For some industries, a strong dollar isn’t necessarily a bad thing. For example, jewelry stores and high-end luxury retailers benefit from a decline in commodity prices — namely, gold, silver, and platinum. The longer-term decline of the precious metals from their 2011 peak is boon for luxury store margins.

However, there is a big caveat — a strong dollar must also be met with a strong economy (ie. rising number of jobs and wages). A rising greenback without an accompanying labor market is not helpful at all for luxury retailers. That’s because workers need an influx of discretionary income to be able to afford luxuries. Without a stronger consumer base, a strong dollar becomes an annoyance due to its negative impact on foreign sales and tourism.

So this idea that’s floating around that the affluent will carry luxury brands for the holiday quarter this year is a risky one. It could happen. However, I think you have to respect the technical charts for the dollar index. 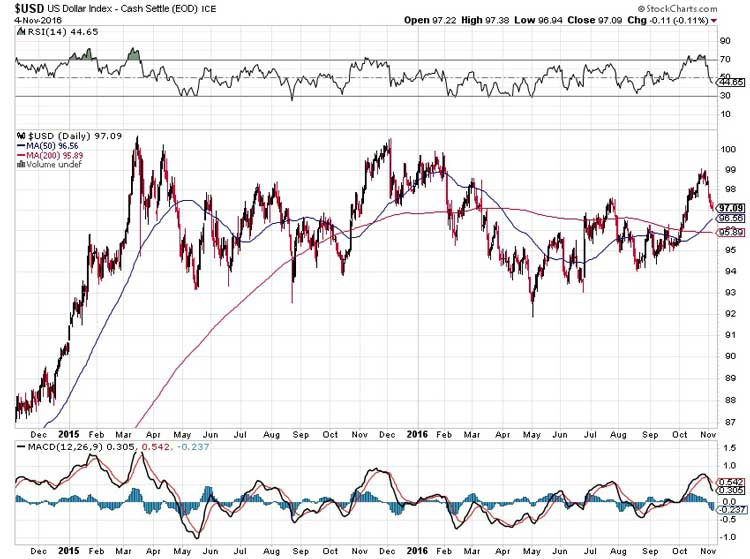 Since the beginning of May, the greenback has been charting a steadily rising bullish channel. This is a classic channel featuring higher highs and higher lows. The decline that we saw recently shouldn’t be treated as a bearish reversal unless it penetrates the support line of this channel. It hasn’t. Thus, making a critical business decision on the assumption that the dollar will weaken is not prudent.

Instead, I think we should operate on the idea that the dollar will continue to be elevated for the rest of this year. Mind you, this is not about the dollar being inherently strong. If it was, the economy would also be strong, which it is not. Instead, the U.S. finds itself once again as the best house in the worst block.