Risk Analysis of the Silver Market

Although the precious metals complex has the potential to be an important allocation of one’s investment portfolio, a litany of commodity experts and financial analysts have stressed the risks associated with this particular sector. Industry names such as David Morgan, founder of The Morgan Report and renowned authority on gold and silver investments, emphasize the volatility that is typical of these markets. However, volatility alone is not necessarily the best indication of risk, since a given range of price fluctuation is necessary for capitalization incentives. After all, what would be the point of an investment if it was virtually guaranteed to maintain the status quo? To get to the bottom of the peculiarities that define the precious metals, a contextual analysis is required.

For the purposes of this article, we will focus on the silver bullion market, specifically the iShares Silver Trust (NYSE : SLV). Ubiquitously known under its ticker symbol as opposed to its official name, the SLV is an exchange-traded fund that tracks the performance of the physical silver market. Although it is not a perfect performance barometer (no ETF is), the advantages of analyzing the SLV are highly accurate tracking mechanisms and availability of detailed historical price data.

The next step is to incorporate available information from the SLV and juxtapose it onto a utilitarian framework, one that fosters insightful and actionable decision-making processes. Traditional methodologies of technical analysis can be useful but suffer from one glaring vulnerability: the lack of a relative variable. In virtually all scientific, sociological, or statistical study, an independent variable is modulated to determine the effect on a dependent variable. In a typical chart for a stock or commodity, the dependent variable (output) is the price, but what is the independent variable (input)? Time is the only answer available, but it would be incorrect. The very existence of acute market swings is a testament to the fact that time is merely a matter of record, not a source of causation.

What is critical to a deeper understanding of market risk is the introduction of binomial variability. For our purposes, I have elected “market strength and weakness” as the independent variable and “return on investment” (short-term basis) as the dependent variable. In other words, we are looking to see if variance in market dynamics result in changes for ROI, or whether we make or lose money. Because the two variables can be judged to be either positive or negative, I will be using the term “risk quadrants” to describe this analytical framework. 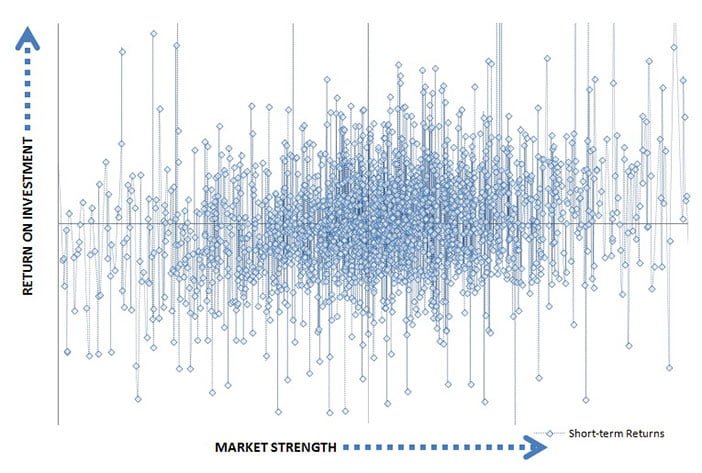 Plotting the aforementioned variables (data collected between May 1, 2006 and February 13, 2015) for the SLV into the risk quadrant analysis, we discover that when the market is neither particularly strong nor weak, the propensity to produce positive or negative returns on investment is roughly identical. This means that on most days when the market is producing price fluctuations plus or minus one-percent, an investor has as much chance of being profitable on his or her investment than being underwater. It should be noted that on days when the market is weak, there is a slightly better chance that the market will continue to slide as opposed to rebounding. Thus, catching a falling knife is ill-advised in the silver market, as evidenced by the notorious difficulty in bottom-calling this sector.

The dynamics in the bullion market are also far different from the major equity indices. Benchmark barometers like the S&P 500 have a definitive upward bias: market cycles that are bullish typically build off of that momentum and rarely breakdown without warning. This is why mainstream financial analysts advise a heavier weighting towards mutual funds that track the domestic indices, which can often produce consistently positive results rather than cherry-picking individual stocks. The drawback, however, is that shock events can cripple mutual funds rapidly as their valuation is only as good as the companies’ equity shares of which they hold in their portfolio. The intrinsic value of precious metals makes it highly unlikely that their value will drop to zero.

That being said, the day-to-day risks for the metals complex is substantially higher than the stock market not only for the volatility but because the volatility is so unpredictable. In certain circumstances, the independent variable (market strength) is ineffective in determining one’s rate of return, which makes the practice of buying into momentum or buying the dips highly suspect.

I will dive further into the risk assessment of the silver market in Part II of this series.