Perhaps as a case of the truth finally catching up to the fiction, the labor market, according to ADP — one of the world’s premiere human resource solutions provider — recently took a sentiment dive. With 189,000 nonfarm jobs being added to the economy, this figure was 16% below Wall Street’s expectations of 225,000, a rare “negative surprise” in one of the most fundamentally illogical bull markets. The resultant unconvincing move in the major domestic indices has led many investors to seek higher return probabilities in foreign markets, particularly in China where the Shanghai Composite index has hit multi-year highs. However, the Chinese economy has its own pressing challenges, which include geopolitical tensions in the Asia-Pacific theater, a potentially brewing real estate bubble, and inverse demographics. Is capitalization towards Chinese equity markets simply a case of investing in the least bad neighborhood? Or is there something more to this story?

From a technical analysis standpoint, there’s a lot to love about the Shanghai index. After muddling through a tightly cyclical trend channel between the end of 2011 and the summer of 2014, the price action veritably skyrocketed. The initial launch was telegraphed by a long-term pennant formation whose base was established in November of 2012. 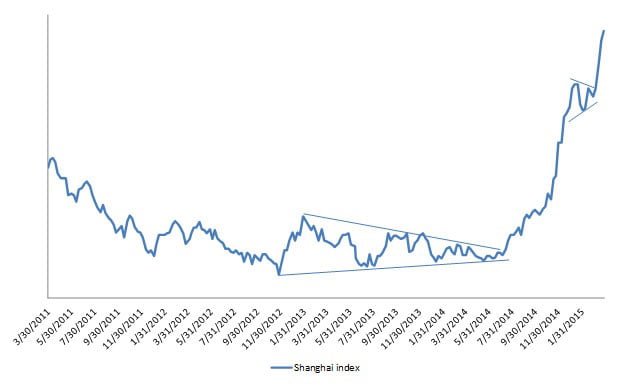 Then, during the ringing of the New Year, the velocity of the rally declined significantly, eventually pulling back for a correction. The volatility was rather short-lived as the price action charted another pennant formation. Since the dominant trend was bullish, this pattern was widely considered a “continuation” pattern, or technical analysis jargon for a brief pause in momentum before resumption of the rally.

Under most circumstances, traditional adherents to the technical methodology and typical Wall Street advisors would likely make a case for “buying into strength.” Acquiring depressed assets or equities is rarely, if ever, encouraged by mainstream financial experts. In the case of the Shanghai index, there is enough technical evidence to justify a bullish forecast for the next six to 12 months.

However, one fundamental counterargument must be recognized. Exactly four years between March 2011 and March 2015, the Shanghai index and the U.S. Dollar index share a 75% statistical correlation. This means that as the greenback increases in valuation, so too does benchmark Chinese indices. The reason is fairly straightforward. Because China mainly relies on exporting goods and services, a stronger dollar increases the purchasing power of the American consumer. Likewise, a weaker dollar diminishes purchasing power, and thus making Chinese exporters less attractive to investors.

During the enormous rally which added nearly 100% of valuation from the summer of 2014 until today, the Shanghai index shares an astounding 95% correlation with the dollar.

This is problematic for a few key reasons:

• As mentioned earlier, the U.S. economy isn’t necessarily roses and gummy bears. A few more under performing jobs reports and quantitative easing can be back on indefinitely.

• The shift from 75% to 95% correlation signifies that Chinese equities are driven by an anomalous, one-off rally in the dollar. What happens when the dollar momentum stabilizes?

Major changes aren’t likely to occur in the short-term and the bullish enthusiasm in Chinese equities should continue for some time, allowing swing-traders to profit from the momentum. However, underlying indicators do warrant caution for a longer term perspective.