Silver Just Did Something Not Seen in Past Four Years

With Brexit rocking international markets, the long-embattled precious metal sector is now seeing what many investors have been waiting for — an honest-to-goodness recovery. Commonly cited benchmarks SPDR Gold Trust (ETF) (NYSEARCA:GLD) and iShares Silver Trust (ETF) (NYSEARCA:SLV) are up 29% and 46% year-to-date. Save for a relatively sharp correction for the month of May, 2016 has mostly been on the up-and-up for gold and silver markets. But a rare occurrence in the silver spot-price has got a lot of insiders very excited.

Gold bullion being the international standard that it is, will of course receive most of the media’s attention. After all, the wealthy elites who are fearful of a Brexit-based backlash have poured into gold as a safe haven. That’s understandable given the historical importance of gold. Nevertheless, silver’s pricing dynamics is a critical gauge as to whether precious metals as a whole will continue moving forward, or if the rally is merely a flash in the pan.

Yes, silver is trading higher than gold by a margin of close to 60%. That is to be expected, however, as silver is typically the more volatile precious metal to gold. What’s important to note is that both metals are seeing strong double-digit performances, despite factors that are actually bearish for silver. Global economic indicators have been lackluster, to say the least. Brexit just adds more uncertainty to the mix. Because silver is more sensitive to economic downturn, its continued dominance is very reassuring.

Recent bullish trades for silver are no fluke. After the precious metals’ meteoric rise in 2011, the following year until the end of 2015 brought along a decisively bearish trend. In that time period, there have only been two months where silver registered a double-digit performance — August 2012 and June 2014. That’s an awfully long time to wait for a turnaround. 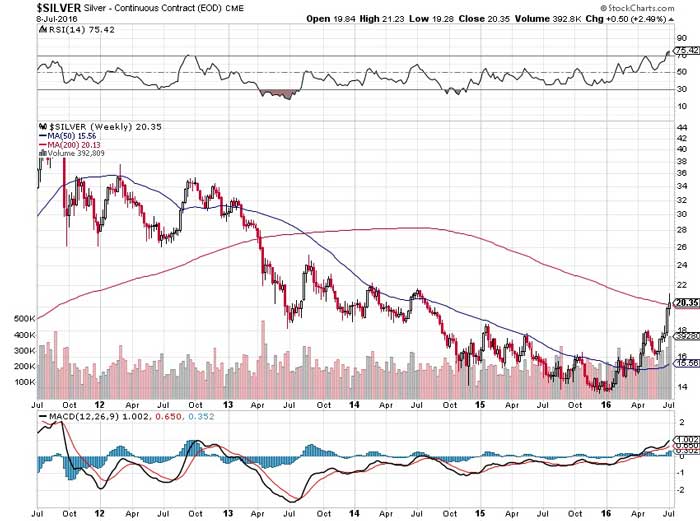 But something very special happened this year. Already, we have seen two double-digit monthly gains, equaling a metric that took four years to accomplish the last time around. They’ve also come in very close to each other — in April, where silver gained 14%, and in June, tacking on another 14%. With only one month falling into negative territory, there’s an argument to be made that silver is really building up for strong gains in the future.

It’s also important to look at what’s going on in the broader commodity sector. Brent Crude Oil is another recovery story for this year. However, oil has suffered a recent setback. Over the past 30 days, the Brent index has lost nearly 9% of valuation. Ordinarily, that would cause a corrective fallback in other commodities. Yet both gold and silver have had their strongest performances in the past trailing month.

There’s an obvious dichotomy here. While it’s impossible to predict with absolute certainty, we can be confident that there are developments in play that are more than just trading dynamics. There is real fear in the markets and that is driving money into physical and fungible assets.

Under that criteria, there is no better vehicle than gold and silver.