Lost within the talking points generated by last week’s surprise announcement by Federal Reserve Chair Janet Yellen – in which she reversed against mainstream consensus by keeping interest rates steady – were unusual fluctuations within the commodity markets. True to form, the U.S. Dollar index, a comparative indicator of strength relative to a basket of foreign currencies, absorbed a sizable downdraft due to the inflationary implications of Yellen’s decision. However, the crude oil market, in particular West Texas Intermediate, failed to gain convincing momentum in light of its bullish fundamentals. Yet this circumstance did not impugn a negative forecast for silver, which racked up considerable basis points in valuation. Its dramatic swing, besting other precious metals, may be a sign of an imminent trend reversal.

Silver’s rise, catapulted by technical accumulation under increasingly higher volume loads, provides a strong indication that the long hands of the market are buying into the rally. Ordinarily, extreme spikes in volume are an indicator of consensus. In this most recent rally, the aggregate volume is not particularly large. Rather, it is the change in volume that is rising, which plays in harmony with rising prices. 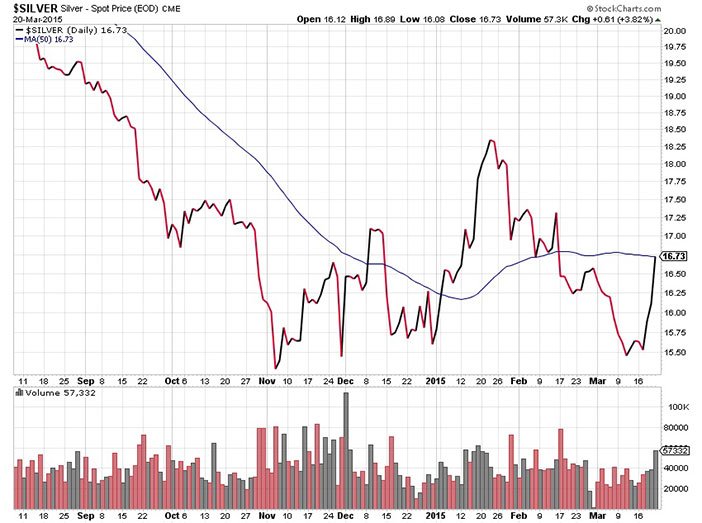 For a bull run to be sustainable, it cannot be subject to whimsical trading forces. Massive buying or selling for one particular session hardly sets the tone for an asset’s future trajectory and in many cases simply introduces chaos in the markets. For example, the highly irregular one dollar dump in the silver spot price for the last day of trading for November of 2014 was quickly followed by a recovery of near-identical magnitude. That accumulation was accompanied under higher than average volume, but what did that mean in the long run? The next consecutive trading sessions were quietly benign, which told us that the mass rush of buying was simply in reaction to bearish over-enthusiasm and did not have much bearing on future market patterns.

The relatively subdued nature of the recent upswing is in stark contrast to previous bullish optimism. The fact that the silver price is again at the $16 range lends credence to the idea that the professional traders in this market have their limit orders entrenched here. This is further confirmed by market patterns where bearish momentum have failed to successfully hold silver down below $16. At a bare minimum, $15 may be an “institutional floor,” a price point where the heavy hitters will come out swinging.

Of course, nothing in the precious metals complex is guaranteed. One of the immediate concerns for a sustained rally in silver is that the closing price from March 20 rests on the 50 day moving average. By itself, such a metric is simply a running average of historical prices and implies no “magical forecast.” However, professional traders regard it as an important psychological threshold. If prices should overcome its 50 DMA, that would represent a higher probability that a silver recovery is on its way.