Are Silver Prices a Forward Indicator of Market Volatility?

Although the U.S. financial markets have tacked on a generally positive week, we are still no closer to determining their long-term trajectory. Will the markets continue to push forward as the “best house in the worst block?” Or will they tumble, fast and furious, until they hit bottom at a more reasonable valuation? Commonly used indicators — oil markets, international indices, even gold to some extent — have failed to provide clarity. However, one overlooked factor — silver prices — may provide a clue as to what we can expect in the near future.

Silver prices are a unique element within financial markets in that they reflect both monetary supply and industrial demand. For the most part, silver is used for industrial purposes — wherever production and manufacturing demand goes, so too will silver prices. At the same time, monetary policy (ie. inflation) plays a significant role in silver bullion’s valuation. Its historical relationship with gold makes this statement all the more accurate. What happened in 2011 when both gold and silver prices jumped to record levels is a prime example of silver’s gauge towards underlying monetary policy.

As it turns out, silver prices also have a unique relationship with the benchmark S&P 500. Since the beginning of 2007, silver and the S&P index share what is known as an inverse correlation; that is, as silver moves higher, the S&P tends to move lower. Using more precise language, the movement of the S&P contrasts mathematically with the movement of silver over a set time period. 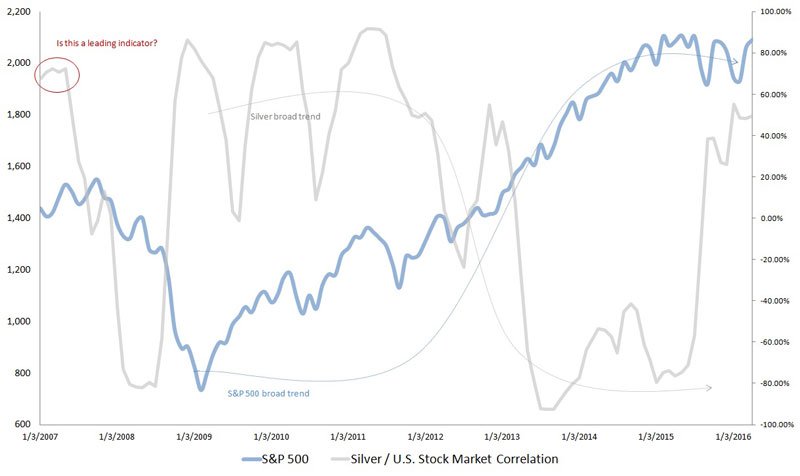 This is very evident when we juxtapose the price action of the S&P 500 with the correlation (coefficient) between silver and the stock market. Correlation is measured between -100% (perfect inverse relationship) and 100% (perfect direct relationship). From 2009 through 2011, the average correlation between silver and the stock market was 63%. Between 2012 and 2016, the average correlation suddenly shifted to -31%. During that time, we have seen the S&P 500 drop to near 700 points, and then ultimately rally to record highs in 2015.

The mathematical granularity isn’t the point here. Rather, dramatic shifts in the silver-stock market correlation tends to indicate important changes in the S&P 500. For example, the correlation collapsed sharply from high to low in 2013. That was the year when the bullion markets entered a pronounced stage of weakness, while the S&P started on its incredible journey to record levels. Also, in 2007, the correlation spiked up just as the S&P reached a then-record price level. You know the rest of the story.

Currently, we have a very intriguing setup. The S&P 500 is within inches of its all-time peak. Just recently, the correlation spiked from multi-year lows to multi-year highs. If history were to repeat itself, it would suggest that the S&P index is due for a crash, whereas silver is poised to build off its potential from 2009 and 2010. When we consider the fundamentals — namely, lack of real growth — the “crash indicator” of silver becomes more compelling.

Ultimately, the silver correlation is one of many tools to consider the health of the broader market. It does not with absolute certainty foretell future market direction. Nevertheless, due to the dramatic nature of the change in silver prices, it’s something that we shouldn’t ignore.