Call it the Friday the 13th massacre. Last week’s start to the weekend will go down as one of the more infamous in recent memory. As geopolitical events spiraled into new dimensions with the active involvement of the Russian military in Syria, the French (and by proxy, the West) received an unwelcome signal that a hot war has already breached their borders. In a similar, though far less violent vein, bullish investors of U.S. equities once again learned a harsh lesson — poor fundamentals cannot be papered over forever.

The average 1.27% loss incurred by the three major U.S. blue-chip indices was attributed by the mainstream media to the sharp volatility suffered in the crude oil markets. The international benchmark Brent Crude took it the hardest in the chin, dropping virtually 4% on Friday. West Texas Intermediate — or the light crude index — had an easier go at it, though it too lost 2% for the day. This was the first time since mid-March that both oil indices lost 8% for the week.

The primary reason for the fall was excessive supply, with crude inventory swelling across multiple sources. U.S. production data indicated that domestic supplies were approaching close to record levels, and the number of oil rigs increased for the first time in 11 weeks. Additionally, the International Energy Agency (IEA) stated that 3 billion barrels of crude and petroleum products were sitting in oil tankers globally — a new record high.

Sellers are many, but few are willing to buy. The problem will likely be exacerbated, according to the IEA, due to weather patterns that suggest a mild winter this year. Sophisticated Wall Street traders are taking heavy precautions, with stop-losses established from a high of $40 in the Brent index to a low of $25. 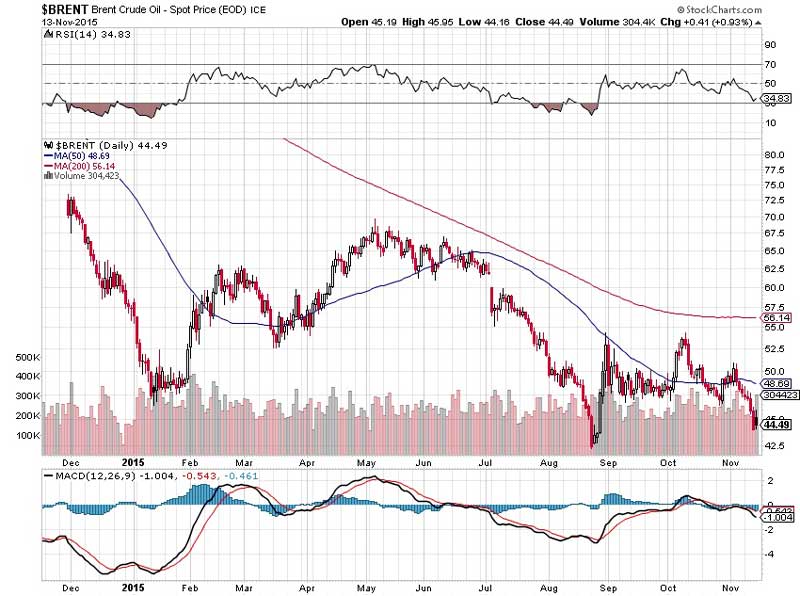 Is the bearishness justified? Absolutely it is! From a technical analysis perspective, there are several challenges that must be addressed. Primarily, it has been over a year since a death cross flashed in Brent Crude. For those who are not familiar with the term, a death cross is a signal when an asset’s 50 day moving average crosses underneath its 200 DMA — in other words, recent aggregate trading has trended below that of longer-term thresholds. The death cross was about to reverse itself in June of this year, only to be stymied by the familiar obstacles of higher oil production and increased inventory.

The second critical challenge to the oil markets is the poor performance of U.S. equities. While crude took up most of the mainstream attention, it should be noted that the S&P 500 lost nearly 2.7% last week — a terrible figure as we close steadily upon December, where a potential interest rate hike by the Federal Reserve is awaiting us. If any more weakness were to befall the domestic markets, the S&P would be in danger of dropping to –and beneath — its support line established at its 50 DMA.

Only time will tell if this bearish prognostication will hold true. It should be noted, though, that several companies — particularly retailers — have released poor earnings results. Supposedly, the economy is on its path to recovery and that consumer confidence is near record highs. If so, the poor financial performance of major players on Wall Street are a curious sight indeed.

That is, of course, if the stories we were told were lies. Then, the deflated markets are certainly nothing that should warrant surprise.