The Small to Large Cap Correlation

Given the emphasis by mainstream news outlets and various government agencies toward the alleged improvement in economic outlook, one would expect to find a strong and consistent correlation between the equity indices that cover the full spectrum of business activity in the United States. Specifically, if the labor market is substantively recovering the opportunities lost after the global financial crisis of 2008, this would be reflected not only in the valuation of large capitalization indices such as the Dow Jones or the S&P 500, but also in the Russell 2000, which includes the public equity of small-cap names. However, the general similarity in trajectory between large and small cap sectors may be deceiving and the details may hide a potentially grave circumstance in the coming years ahead.

This article will focus on the technical chart of the S&P 500 and the Russell 2000. From a visual perspective, one immediately notes the difference in velocity between the two charts. While the S&P continues to make steady inroads to higher plateaus, punctuated occasionally by sharply volatile selling pressure, the Russell out-accelerated its bigger brother in the middle of 2013, eventually peaking at 1,208.65 points on March 4, 2014. From there, the Russell has made several attempts to claw back at those record levels, only to have rallies fail at lower and lower intervals.

Conversely, the S&P index just recently closed at record highs (2052.75 points on November 20, 2014, at time of writing). Performing simple arithmetic, the small-cap Russell index, despite getting off to a heady start, is at virtual parity with the S&P 500 on a peak-to-trough analysis for this decade. In other words, since January of 2010, the Russell gained 99.6% of valuation from its lowest point to its highest point. The same exercise for the S&P nets a gain of 100.7%. 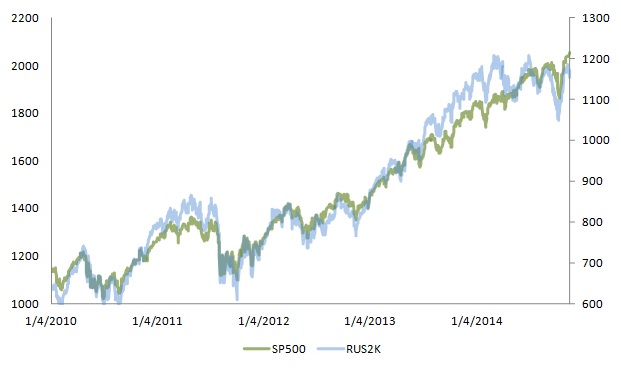 While the results at time of writing are virtually identical, it should be noted that how the two indices arrived at the same spot is completely different. The small-cap indices quickly absorbed the euphoria and the promise evident last year in regards to the Federal Reserve’s teasing suggestion of indefinite quantitative easing and artificially lowered interest rates. Fundamentally, smaller businesses are more sensitive to changes in interest rates as these companies may not have the capital resources necessary to fund major projects; therefore, borrowing costs are much more of a concern that it may be for a larger, established company. The petering out, then, of the Russell index since the early spring of this year is rather conspicuous, given that the peak in the index occurred a month after Janet Yellen was sworn in as the Fed Chair(wo)man. Then, on March 19th, when Ms. Yellen’s first Federal Open Market Committee announcement was issued, which stated an unsurprisingly firm resolve to reduce the central bank’s asset purchases, the Russell tumbled. However, the S&P index, generally speaking, continued to push higher, eventually hitting intra-day records while the smaller-cap index was experiencing a technical bottoming.

Does that make much Sense?

That’s bad news from both a stock market and macro-economic viewpoint. Ideally, growth should be balanced between the equity valuations of small and large companies. If anything, growth should accelerate in the small caps, as such companies are typically in the early stages of development, an area where expansion is more easily realized. Larger companies are usually competing in saturated markets, making their growth prospects much more limited on a percentage basis. Yet the exact opposite is happening. Currently, the large cap indices are leading the way, while the small caps are meandering in range-bound trading over the better half of this year. This imbalance is yet another sign of the hidden illness of our economy and provides more reason to consider safety hedges against a sudden turn of volatility.