Amidst the tragic irrationality of yet another school shooting, this time at Marysville Pilchuck high school in Seattle, Washington, the ongoing gun control debate was again brought front and center to the national consciousness. However, the fervor of the horrific event appears localized and muted in comparison to substantially more high-profile shootings, particularly that of the Sandy Hook incident in which twenty children and six adults were viciously murdered by a deranged lunatic.

The public sentiment towards the latest act of gun violence, or rather the lack thereof, is indicative of the circumstances surrounding the investment market of gun manufacturers, which have experienced a pronounced decline in valuation throughout most of this year. Some analysts, perhaps most prominently Rommel Dionisio of Wunderlich Securities, have argued that the current downfall represents an enormous opportunity to buy gun shares on the cheap. However, with so much domestic and international turmoil pressuring the markets, is now a good time to go bargain-hunting in this controversial sector?

For purposes of this article, we will focus on Smith and Wesson Holding Corporation (NASD : SWHC). Following a tremendous run starting from December 2011 and later sustained by firearm shortage fears exacerbated by 2nd Amendment threats issued by the Obama administration, company shares experienced a major setback in mid-June of this year, trailed shortly by a 14-percent (one-day) drop in late August. Coincidentally, the August sell-off was aligned with a bearish cross-over when the 50 day moving average dipped below the lagging 200 DMA. Such occurrences are watched closely by professional traders as they indicate broad-based sentiment shifts in the market. 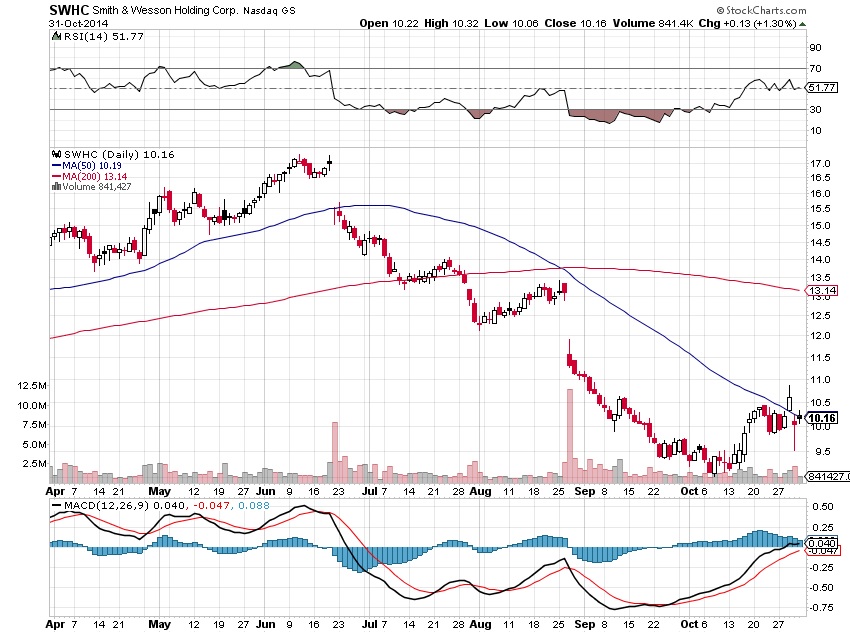 One technical circumstance that sustains the assumptive conclusion of the bearish cross-over is weakness in the Moving Average Convergence-Divergence (MAC-D) indicator. Developed by Gerald Appel, publisher of Systems and Forecasts, this popular analytical measurement is known as a “trend-following momentum indicator” that shows the relationship between two moving averages of prices (Achelis, Steven B. “Technical Analysis from A to Z”. Irwin Professional Publishing. 1995. Print. Pg 166.). Described in granularity, the MAC-D is the difference between a 26-day and 12-day exponential moving average, and this difference is plotted against a 9-day exponential moving average. On technical analysis charts such as those provided by StockCharts.com, the black line in the MAC-D indicator is the MAC-D (“the difference”) and the red line is the 9-day EMA, or the “signal line.”

Under traditional technical analysis methodologies, a sell signal is generated when the black line falls below the red line. Where Smith & Wesson stock stands at time of writing ($10.16) represents a precarious ledge, especially considering that a few months ago, shares were trading hands at $17. The comeback attempt by the bulls appears rather impotent, with the price action failing to break convincingly above the 50 day moving average. Consequently, the MAC-D line is poised to dip under its signal line. This has bearish omens when observing recent historical price and trend behaviors, which has failed to stem the volatility.

The overall presentation of the MAC-D is telling us that the culmination of buying momentum is not enough to overcome total selling pressure. The accumulation (buying) is executed too thinly and inadequately, whereas the distribution (selling) is pronounced, accompanied by large swings in volume. Furthermore, the enormous “gap-down days” in the technical charts, particularly between June and September of this year, indicates massive fundamental bearishness. A gap is a reference to the opening price of a traded asset being higher or lower than the entire range of trading from its prior session.

Mr. Dionisio may be right about the undervalued opportunity for Smith & Wesson. However, the all-important timing is a question that deserves serious and sober reflection. With the immediate sentiment not conducive for supply and demand shocks for the gun industry as a whole, it’s unlikely that firearms manufacturers will be able to rely on favorable fundamentals, at least in the short run. Therefore, a cautious approach dictates that investors should wait this one out until all selling pressure has exhausted itself.